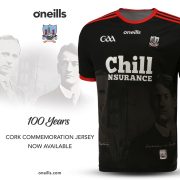 The Cork Commemorative Jersey is currently on sale online here

The Jersey was worn by the Cork Hurlers against Limerick and by the Footballers against Derry. 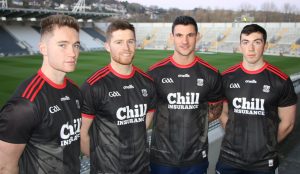 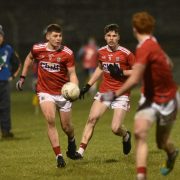 The Cork Under 20 Football Team to play Kerry has been announced. 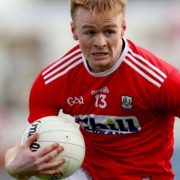 Cork survived a late scare as Derry battled from 10 points down with only eight minutes of regulation time remaining to lose by just two at Páirc Uí Chaoimh.

The result leaves Cork on the verge of promotion back to Division Two, requiring just one more point from their remaining two games to be sure.

They led by 1-5 to 0-4 at half-time after playing with the howling wind. Damien Gore scored their goal in the 19th minute following a mistake from a short kickout.

Cork added a second goal after 45 minutes, when Paul Kerrigan set up John O’Rourke, who added a third following a strong Sean Powter run on the hour.

Just before, Derry’s Niall Loughlin grabbed their first goal, but with 62 minutes gone, Cork had raced 3-12 to 1-8 in front and were coasting.

But Derry kept battling right to the end as goals from Emmett Bradley and substitute Patrick Kearney left Cork sweating on the final whistle.