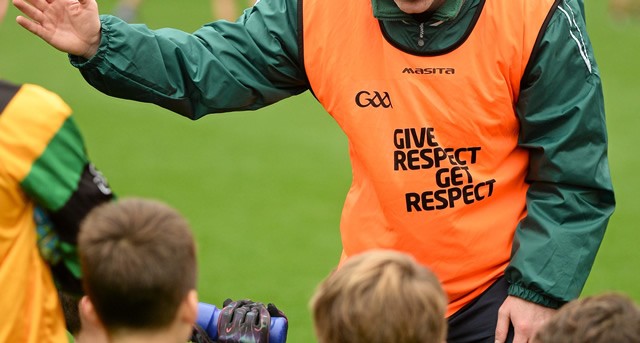 In January, Pat Spratt started a new project in Mallow National schools for 2nd class teachers and pupils. This coaching project ran for a duration of 6 weeks in three schools Gaelscoil Aogain, St Pats boys and Scoil Ghobnatan. Mallow being a huge urban area has a lot of children who never get the opportunity to take part in our games. This was the motivation for running the programme.
The 2nd class” Maghealla peil” project saw Martin Farrissey coach in St Patricks Boys National School Martin O’ Brien in Scoil Ghobnatan National School and Pat coaching in Gaelscoil Aogain. There was five weeks of uninterrupted coaching with all 2nd class pupils and class teachers followed up our sessions twice more weekly as part of the PE Curriculum. Pupils loved the project and there was huge improvements in the players  skills and Movements over the duration of the project.
At the end of the five weeks on March 4th schools brought all 180 pupils to Mallow Gaa pitch in the town park to take part in a football Blitz day. Sixth class boys and girls refereed on the day. All schools were mixed up into teams where boys played together and girls same giving everyone an equal opportunity to play in small sided games. Mallow GAA were on site to inform children of how they could join the club for the season ahead.
The project has been very successful and allowed 180 children the opportunity to play GAA, facilitated teacher training in physical education delivery and allowed Mallow GAA to build relations with pupils and the schools which will help in the recruitment of new players.
A similar project had recently commenced in Kanturk also and will resume once GAA activity returns .
Pat Spratt is a GDA in the North Region of Cork and you can follow Pats work on Twitter: @CorkGDAPatSprat
https://gaacork.ie/wp-content/uploads/2020/03/coach-children-640x343-1.jpg 343 640 Joseph Blake https://gaacork.ie/wp-content/uploads/2019/11/logoofoot.png Joseph Blake2020-04-01 11:50:232020-04-01 11:51:16GDA Pat Spratt shows the value of school GAA initiatives.
Rebel Óg Coaching Webinar Wednesday