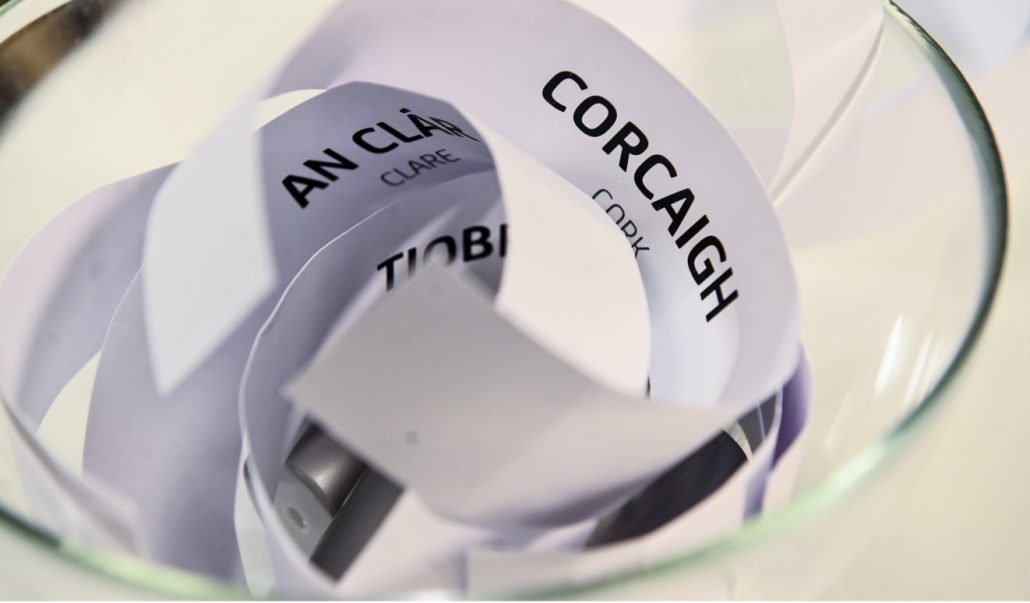 The draws for the 2021 Senior Provincial Football and Hurling Championships will be broadcast live by RTÉ next Monday and Tuesday, April 19 and 20.

The 2021 Munster Football and Hurling Championship draws will take place on RTÉ Radio 1’s Morning Ireland show on Monday, April 19, at 7.30am and 8.30am respectively.

The Munster Senior Football Championship is a knock-out open draw. Four teams are in the pot for the quarter-finals – Kerry, Clare, Limerick, and Waterford. The two quarter-final winners will advance to the semi-finals where an open draw will pit them against either defending champions Tipperary or Cork. drawn Monday, April 19, at 7.30am

The first team drawn plays the second team drawn in the first semi-final. The third team draw goes in to the second semi-final where they will play the winners of the fourth and five team drawn who must first play one another in the quarter-final. drawn Monday, April 19, at 8.30am

Then, later that same day, the 2021 Connacht Football Championship draw will televised on the 6.01 News on RTÉ 1.

The 2021 Leinster Football and Hurling Championship draws take place on Morning Ireland on Monday, April 20, at 7.30am and 8.30am respectively.

While the 2021 Ulster Football championship draw will take place later that evening on the 6.01 News.

Four teams are in Bowl 1 – Dublin, Kildare, Laois, and Meath

Step 4: A separate draw will be carried out for the Semi-Finals after the Quarter Finals games are played.

Five teams are in Bowl 1: Antrim, Armagh, Donegal, Down & Fermanagh

Step 1: From Bowl 1, the 1st team drawn plays the 2nd team drawn in Preliminary Round.

Step 2: The four teams from Bowl 2 are added to Bowl 1, and teams are stirred.

Step 3: The third team drawn plays the winner of the Preliminary Round in the fourth quarter-final.

Step 4: The fourth team drawn plays the 5th team drawn in the first quarter-final and so on until and teams are drawn.

Step 1: The first team drawn from Bowl 1 plays the second team in the Quarter Final.

Step 2: The third-team drawn goes into Semi-Final A and will play the winner of the Quarter Final.

There is an open draw for the Leinster SHC Quarter-finals and Semi-Finals.

The four teams contesting the quarter-finals – Antrim Dublin, Laois, and Wexford – are placed in Bowl 1.

Kilkenny, Galway and the winners of the two Quarter-Finals will be in Bowl 2.