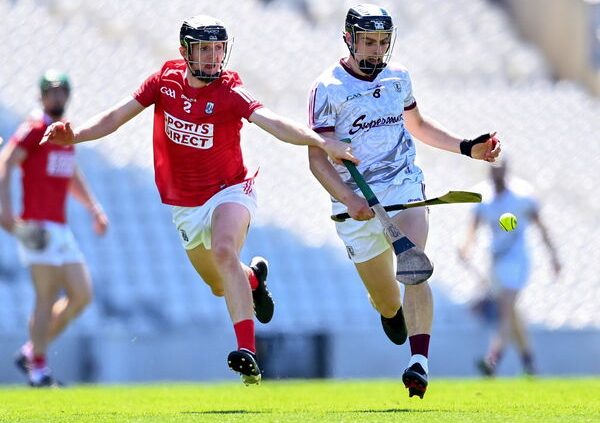 Cork were defeated by Galway, who secured top spot in Division 1 Group A of the Allianz Hurling League as a 12-point second-half turnaround gave them victory over Cork at Páirc Uí Chaoimh on Sunday afternoon.

Trailing by 2-12 to 0-12 at half-time, the Tribesmen fell further behind as Patrick Horgan landed a free for Cork on the resumption but a Conor Whelan goal brought Galway right back into contention and further green flags from Conor Cooney and Cathal Mannion helped them to prevail by five points. The result means that a championship meeting between Galway and Kilkenny this year will double up as the league final.

Cork had a great start, with Conor Cahalane’s goal helping them into a 1-2 to 0-1 lead, but Galway found their feet and they scored five of the next seven points while Evan Niland was denied a goal by a Patrick Collins save. Joseph Cooney’s point – he was one of 12 scorers for the visitors – left them just two points behind, 1-4 to 0-6, at the first-half water break. While Horgan had his fourth point when the action resumed, Galway were level by the 25th minute when Brian Concannon scored the first of his four points.

Three in a row from Cork, two Darragh Fitzgibbon points sandwiching one from Mark Coleman, gave them breathing space again and, just before half-time, they had a fillip as Jack O’Connor scored a point and then intercepted the resultant puckout to slot home a goal for a six-point lead.

That advantage stretched to seven thanks to Horgan’s sixth of the day but Whelan, set up by Cathal Mannion, produced an instant riposte for Galway with a goal and Joseph Cooney followed that with a point.

With Shane Kingston’s point Cork’s only score from play in the third quarter, Galway were able to eat into the deficit, helped by the relocation of Cathal Mannion to centre-forward. He had two points in quick succession and then Galway were level just before the water-break as Fintan Burke’s sideline cut was won by Brian Concannon, who fed Conor Cooney and he fired home.

While Pádraic Mannion put Galway in front after the break, Cork looked to have steadied as Horgan (two frees) and Fitzgibbon pointed, but they didn’t lead again after Niland and Fintan Burke levelled for the visitors.

Daithí Burke set up Concannon to put Galway in front and, though Fitzgibbon levelled with his fourth, Cathal Mannion’s goal, a batted finish from David Burke’s pass, put three points between the sides. Points from Galway subs Niall Burke and Jason Flynn opened up a five-point advantage going into injury time and, after the remaining four points were shared, that was the margin at the end, too.