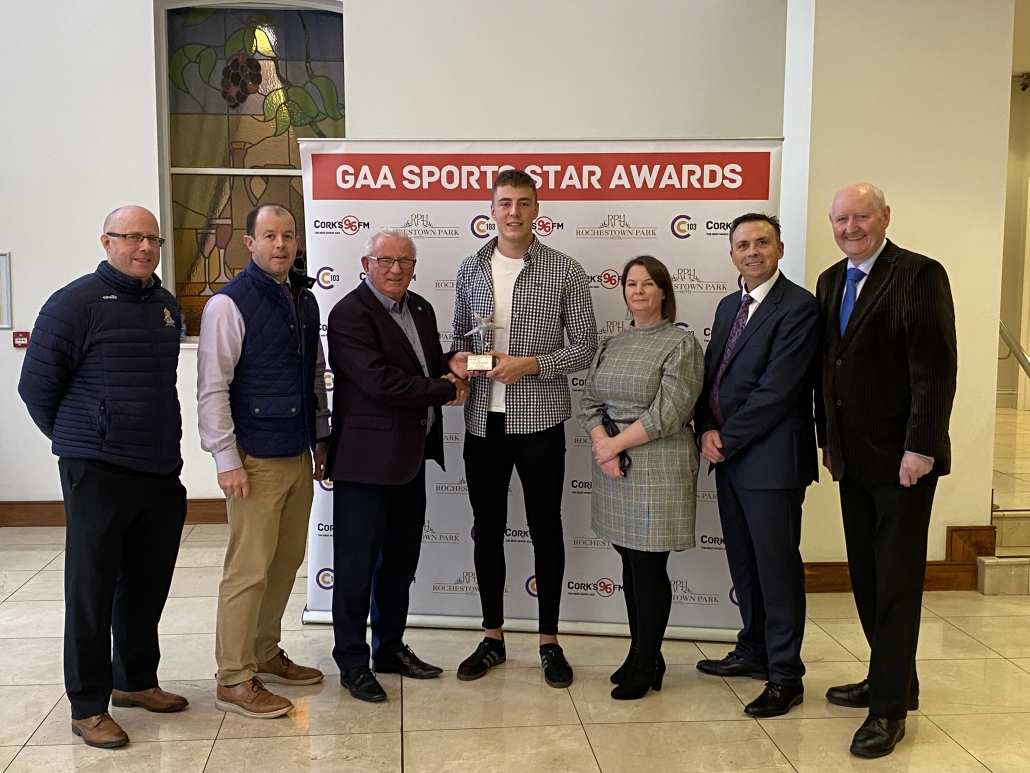 In what were probably the worst conditions imaginable St Finbarr’s put 29 years of heartbreak behind them to finally capture the Sean Og Murphy with a stunning display against old rivals Blackrock.

Key player in that win was Ben Cunningham turning in a man of the match display hitting 0-9 and was a worthy recipient of the 96FM/C103 GAA Sports Star award for October in association with the Rochestown Park Hotel.

Ben was delighted to be honoured but was quick to acknowledge that winning the title was very important “it was a big win for the club after such a long wait and we are delighted, and I am accepting this award on behalf of all of the team who played their part in the win.”

As for the day itself “it was very special and with so many family connections it made it better again.”

Ben’s dad Ger was the coach, his brother Sam played as a 2nd half substitute, while his cousins Eoghan Finn and Brian Hayes last year’s overall award winner were also important players on the team.

County Board Chairman Marc Sheehan was fulsome in his praise for Ben and his team mates, “I would really like to congratulate Ben on a truly exceptional display that was key to the win, and also St Finbarr’s on their contribution to the Championship as they were outstanding in all their games and of course we wish them the very best of luck in Sunday’s Munster semi-final.”

Marc also thanked 96FM/C103 and the Rochestown Park Hotel for “their continued support and promotion of these prestigious awards and also supporting the Board in other means as well it is greatly appreciated.”

Ben’s family were in attendance along with club officials Diarmuid O’Meara, Billy O’Shea and John Cremin, while County Board officers Francis Kenneally and Pat Horgan were present along with Isabel Keane 96FM/C103.

Ben now joins the previous monthly winners in the race for the overall award.

St Finbarr’s Sam Ryan was the January winner while Ballygiblin’s Joseph O’Sullivan picked up the February award, there were joint winners in March with Rochestown College and Beara Community College honoured for their All-Ireland wins in hurling and football, Handball was acknowledged in April as All-Ireland doubles champions Brendan Fleming and Donncha O’Connor were honoured and in May Ben Shorten was the recipient as Ballingeary were crowned Comortas Peile Na Gaelthachta Senior Champions for the very first time.

While the June award went to Colm Lyons on his appointment as referee for the All-Ireland Hurling Final, Cork Camogie star Libby Coppinger was the July recipient.

Erin’s Own Kieran Murphy was the August winner, with Blackrock and St Michaels dual player picking up the October accolade.

The 2022 Banquet will now take place on February 10th next in the Rochestown Park Hotel where GAA President Larry McCarthy will be the guest of honour.

Two other awards will be presented on the night The Kieran O’Driscoll Youth Award and the Donal Lehane Distinguished Career Award.