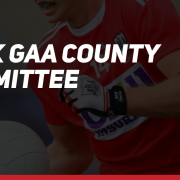 The first County Committee meeting of 2021 was held online on Tuesday January 12th. The Chairman Marc Sheehan welcomed everyone to the meeting and said how he looked forward to working with the clubs , board members and executive members and all those involved with Cork G.A.A. The minutes of the previous meeting (November 24th 2020) were proposed and seconded.

The Rúnaí raised a number of items of correspondence that had been received from Sarsfields Hurling Club re age grades, correspondence re Rebels Bounty, fixture enquiries and Inter County teams.

The Sarsfields’ correspondence related to games being provided for the in-between ages of 14 and 16. This has been forwarded to Rebel Óg for consideration.

In relation to the Rebels’ Bounty members draw, The Chairman said the draw was being promoted vigorously and significant engagement was taking place with clubs and members by our staff and the Support Committee. The first draws will take place in the Spring of the year based on the framework agreed before Christmas. Being conscious of the Covid-19 situation and based on feedback from clubs, the first three draws will be held on March 25th 2021.

The Chairman gave an update on inter-county appointments. A meeting of the Executive was held on December 28th at which Ronan McCarthy was reappointed as Senior Football Manager for a 2-year term along with outgoing selectors Cian O’ Neill and Sean Hayes. Newly appointed selectors are John Hayes (Carbery Rangers) and Bobbie O’ Dwyer (Macroom) The Chairman thanked outgoing selector Gary O’ Halloran (Ballinora) who is stepping down for personal reasons.

A Minor Football appointments committee has been set up and it is expected to have a management team finalised in the very near future.

The Chairman reiterated the Board’s commitment to full compliance with National Public Health Guidance and Association guidance as they pertain to all our units and teams. The Executive committee and Senior Football Team Management are presently engaged with Coiste Bainistí C.L.C.G. and we await the finalisation of this process.

The Rúnaí read out a number of Inter-County reports on games that were held in November and December. The Chairman warmly congratulated the Under 20 Hurling panel and management on their Munster final win on December 23rd.

The Rúnaí referred to the progress report. It was highlighted the monthly schedule of meetings and they will be held on the first Tuesday of every month.

A C.C.C. report was given by the Rúnaí. A summary of fixtures was provided. The National calendar had been sent out to the clubs. This entailed a dedicated 12 week only for clubs , and the Rúnaí acknowledged that 12 weeks is very tight in Cork especially for dual clubs. He said the C.C.C .were looking at provisionally starting championships 2 weeks early on the weekends of the All-Ireland Senior Finals and if Cork were in the finals then Championship would be deferred. In relation to the completion of the 2020 competitions, it is clear that the dates previously advised for early March cannot be achieved and it is hoped these games in late June or early July, prior to the 2021 competitions commence but a bigger window is needed to complete the Junior competitions. In relation to the leagues, the C.C.C .are trying to preserve 50% with the amount of league games being played being halved . The Rúnaí said a very successful meeting with Divisions was held on Monday evening. In relation to the Junior B competitions, priority would be given to the open Junior B county. The Rúnaí said he doesn’t see 2020 County Under 21 county competitions being completed. The Rúnaí said the draws had been planned for late January but this has been deferred until early February where either/or teams being used where winners / relegation has to be finalised. Independent team for Under 21 are currently being vetted and this will be all done in advance of the February meeting. The Rúnaí said there will not be any County Junior leagues this year.

The County Treasurer , Diarmuid Gowen, referred to a recent County Treasurers’ meeting. A funding support package is available for insurance. Clubs who wish to avail of this support must respond to the questionnaire they have received by Friday week January 22nd , Diarmuid encouraged clubs to fill it out.

The Vice-Chairman Pat Horgan spoke briefly in relation to the C.C.C. He said the C.C.C was working away with a number of meetings being held and they looked forward to working with the clubs and Divisions for the year ahead.

The Chairman said that Referees administrator Niall Barrett and the referee committee are recruiting new referees and he asked that all clubs provide at least one referee.

The Chairman confirmed that a Sponsorship agreement had been concluded with Sports Direct in early December 2020 and the Board looks forward to the formal launch of this arrangement in the near future. It is a matter of regret to the Board that information had come into the public domain prior to the intended launch of this arrangement. The Chairman acknowledged the generous sponsorship and support of Chill Insurance over the past number of years. The Board looks forward to providing the detail of our Sponsorship arrangements at our next meeting. He also confirmed that the Football Leagues would be sponsored by Cork Credit Unions and the Hurling Leagues by Cork’s Red FM.

The Chairman stated that the allocation of County Board match passes is being reviewed at the moment and a recommendation will be provided at the February meeting.

Votes of Sympathy for deceased members were recorded.

The Chairman concluded the meeting by urging members to comply fully with Public Health Guidance to help curb the spread of the Coronavirus.

The next meeting is scheduled for Tuesday February 2nd at 8pm. 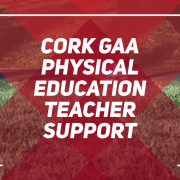 Rebel Og Coaching are delighted to team up with Sciath na Scol to offer Primary School teachers across the county the opportunity to provide students with remote physical education classes over the next 3 weeks. The sessions have been designed by Cork GAA Games Development Administrators (GDA’s) and cater for all students with age-appropriate activities. The classes are aimed at getting children active through fundamental movement skills in keeping with the physical education curriculum. The classes can be done at home as they are delivered on line. To ensure whole school engagement, classes will be streamed across four levels from infants right up to sixth class.
Cork GAA Games Manager, Kevin O Callaghan noted that “children across the county are disappointed they cannot get back to school to meet their friends. For many children, the highlight of the school week is based around lunch time activity and physical education classes. Cork GAA are delighted to be able to offer some support to teachers in trying to encourage students to fit in physical activity even though they are not in school. Our team of GDA’s have put a very engaging programme of activity together and I am sure that many children will have great fun when interacting with the sessions”. Sciath na Scol Chairman, Dave Collins says that “children throughout the county are struggling with Covid 19 restrictions and having a programme of physical activity will provide huge benefits in terms their physical and mental health along with helping to improve concentration levels. I would encourage all teachers to promote these classes with their students and place on record our thanks to Cork GAA for providing this support”.
The links to the classes are listed below. New classes will be uploaded each week until schools return 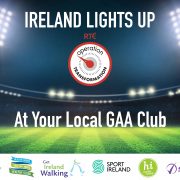 Please find below important club updates relating to the postponement of the Ireland Lights Up walking initiative until February, and a pre season safety reminder about hurling helmets and required safety standards.

Ireland Lights Up postponed to February

The GAA today received a communication from Sport Ireland who, in consultation with the Department of Tourism, Culture, Arts, Gaeltacht Sport and Media, have requested the postponement of the Ireland Lights Up walking initiative until the start of February (dependent on the Government guidelines at that time). We were informed that this late change of position was prompted by the continued escalation of the pandemic here in Ireland.

The grant scheme offered by Sport Ireland and Healthy Ireland to support clubs in the delivery of Ireland Lights Up 2021 (up to a maximum of €1,000 per club, T&Cs apply) remains in place and will be activated once the green light for the commencement of the initiative is given. All GAA clubs that register to participate in Ireland Lights Up will automatically be issued details of the grant process in the coming weeks. As of today 451 GAA clubs had registered. You can continue to register here: https://getirelandwalking.ie/irelandlightsup/

The GAA Healthy Club ‘Every Step Counts’ Challenge in partnership with Irish Life’s MyLife App will proceed as planned and will start on Wednesday, January 13th and will run for 7 weeks. In each province there are 3x O’Neills vouchers up for grabs – €2,500, €1,500 & €1,000. Any club that tracks more than 4,000km during the challenge will be entered into the prize draw in their province.

Register your club here: https://mylife.irishlife.ie/every-step-counts-2021 and get your members signed up to join your club’s team. Please allow 48 hours from registration for your team to appear on the App. If you have any questions or are experiencing any problems with the MyLife app, please email support@mylife.irishlife.ie

In advance of the 2021 GAA season, players are reminded about the need to check that their equipment is in good condition and meets the required safety standards.

The GAA would like to remind all players at all levels in all Hurling Games and Hurling Practice Sessions it is mandatory for, and the responsibility of, each individual player to wear a helmet with a facial guard that meets the standards set out in IS:355 or other replacement standard as determined by the National Safety Authority of Ireland (NSAI).

All players are advised that in the event of a head injury occurring, if the helmet being worn does not meet the standard or is modified or altered from the original manufactured state, they are not covered under the terms of the GAA Injury Benefit Fund.

The following helmet manufacturers currently provide products which meet the standards set out in IS:355 or other replacement standard as determined by the National Safety Authority of Ireland (NSAI).

Players and parents should note that not all products provided by some of these manufacturers meet the standards of IS:355.

Once the helmet or faceguard is modified in anyway, the player is playing at an increased risk of injury and not covered under the terms of the GAA Injury Benefit Fund. 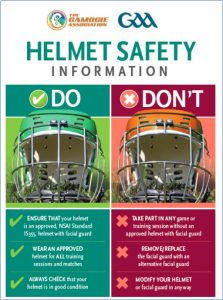