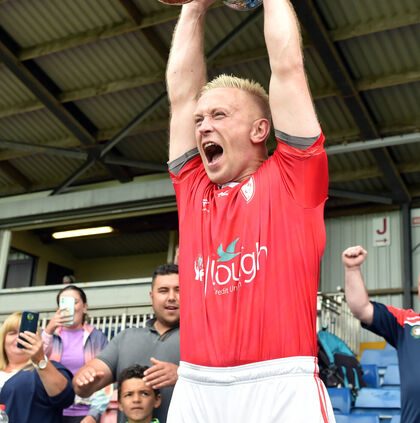 Courtesy of John Coughlan (The Echo)

The Seandún side were winning their second county in this grade following their victory over St John’s in 2017.

Founded in 1928 this is their 93rd year competing in the GAA and it was evident at the final whistle their appetite for winning is still alive and well.

The opening exchanges were sluggish with both teams struggling in the shooting and passing departments before the city side took the lead with well-taken Gavin Corcoran point that was added to by a Jason Keegan white flag.

After looking nervous Freemount settled into their stride and a Michael O’Callaghan free reduced the deficit.

The biggest problem Freemount were encountering was their inability to win the dirty ball as the Seandún outfit were quicker in gaining possession.

Scoring became a rarity for both sides but an eight-minute drought was ended for Lough Rovers when Danny Kiely slotted over a point following a free.

Suddenly Freemount after looking totally outplayed ended a 20-minute spell without scoring as they finished the half with consecutive points from Mark Ballantyne and Liam Enright that saw them reduce the deficit to 1-5 to 0-3 at the interval.

On the restart, Freemount got a chance to reduce the deficit further but Sean Broderick’s point attempt was off target.

The Lough responded and Dane Holland opened their account with a point in the 33rd minute.

On each occasion, Freemount had an opportunity of getting back in the game their kicking let them down in front of goal.

On the other side of the coin, Lough Rovers were far more clinical and Gavin Corcoran showed a classy touch in the 41st minute when billowing the back of the net.

The Lough were allowed the freedom of the park and they followed with four unanswered points that gave them a 14-point lead in the 45th minute.

Credit to Freemount they continued to battle and a well-worked Kieran Broderick goal with 11 minutes remaining gave them a ray of hope.

In the end, the class of the Lough shone through as they were crowned champions in style.