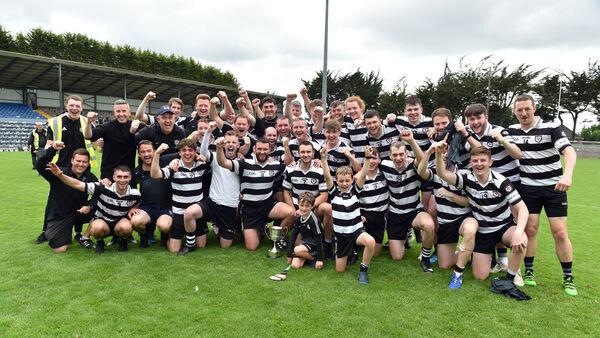 Courtesy of John Coughlan (The Echo)

A POINT deep into added time from Padraig O’Shea was enough for Midleton to see off Ballyhea in the 2020 Co-Op Superstores Junior B Hurling Championship final at Páirc Uí Rinn on Sunday.

This game had everything and the despondency in the Ballyhea camp at the final whistle epitomised their disappointment at not winning the title. On the other side of the coin, the Midleton camp were ecstatic and despite going into the final as hot favourites they were certainly tested by a resilient Ballyhea.

Right from the throw in the pace from both teams was frantic and Midleton full-forward John Keane should have raised a green flag in the third minute but just when he was about to pull the trigger, he was hooked by the Ballyhea full-back Steve Dennehy.

Midleton did settle into their stride and points from Keane and Mark O’Keeffe edged them into a two-point lead in the sixth minute.

The former Cork hurling star Neil Ronan (now 42) is still enjoying his beloved sport and after missing two placed balls it was a case of third time lucky in the 10th minute and a minute later he executed a 65.

For some strange reason, Midleton dropped their intensity as Ballyhea courtesy of a third Ronan point edged ahead by the minimum 0-4 to 0-3 just before the opening water break.

Ronan registered his fourth point following a free on the restart as Midleton were struggling to win any dirty ball, but O’Keeffe reduced the deficit 12 minutes from the interval.

Another problem Midleton were encountering was their tendency to give away soft frees that were duly punished by Ronan.

The introduction of a blood sub for Midleton worked the oracle as Christian Daly replaced Mark O’Keeffe and in the space of two minutes he managed to drill a low ball to the net.

Suddenly Ballyhea looked under pressure but they responded in style two minutes from the interval when James Barrett drilled an unstoppable shot past the bewildered Midleton keeper.

Indeed, Midleton could have finished the half in style but Padraig O’Shea’s batted shot went inches wide of the left post.

Trailing 1-7 to 1-6 at the interval Ballyhea needed a good start but it was O’Shea who came up trumps with the opening point in the 35th minute.

To be fair the standard of hurling was superb for the B championship grade as the striking and hooking and blocking would be on a par at a higher level.

The game was finally poised but super half time sub–Christian Daly came to the rescue of the Magpies when the game was in the balance.

A high ball was caught Ryan McConville who then assisted Daly and in similar fashion to his first goal be gave the keeper no chance.

Neil Ronan continued to punish Midleton and just before the second water-break he struck over his eighth point, but his side trailed 2-9 to 1-9 entering the final quarter.

The class of Ronan came to the fore on the restart when he struck over a monstrous point from 70 yards that was followed by another from play by James Horgan.

Midleton looked to be in meltdown and Ronan levelled proceedings with another stunning strike with eight minutes remaining.

The teams were still deadlocked in the closing minute and with Midleton held scoreless for 14 minutes the title looked to be heading to north-Cork.

Just when extra-time looked on the cards Ballyhea gave away a needless free and Padraig O’Shea duly punished them with a sublime strike.

At times sport can be cruel and Ballyhea despite putting in a heroic hour of hurling just fell short as Midleton dug deepest at the death.