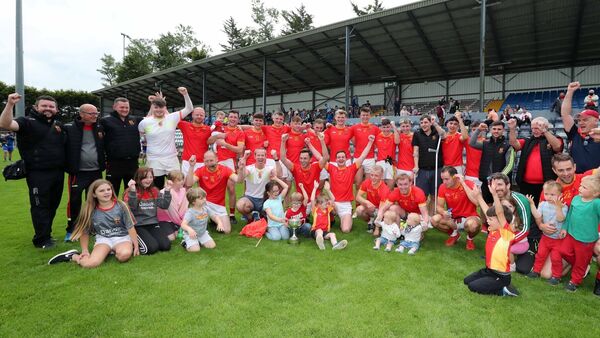 MALLOW tasted the winning feeling when landing the 2020 Junior B Football Championship final in real style at Páirc Uí Rinn.

Right from the very outset, this was a performance full of conviction from Mallow. They were in control of this contest from the opening exchanges and never looked like getting caught by a battling Carrigaline.

Throughout there was overall some fine score-taking and effective game-management, as Mallow edged the battles right across the field and all the hard work duly paid off.

It was a day that saw Mallow show how clinical they can be in front of goal, as they charged home to secure the silverware on offer.

Although Carrigaline pointed for the opening score of the game, Mallow responded in ruthless fashion. Heading into five minutes played on the clock, Paul Lyons raced through well before slotting to the back of the net with a crisp finish.

Mallow added to that when Peter Attridge showed great composure to put the ball over the bar. As the opening half progressed, the momentum from Mallow grew even stronger.

Attridge continued to show his accuracy in front of the posts, which was added to by a fine Michael Fitzpatrick effort from distance.

Not long after the water break, Mallow raced into an even greater commanding position in the overall context of this decider. After a misplaced Carrigaline kick-out, Jimmy Glynn punished it ruthlessly through a clinical drive that was blasted home.

Then just a mere moments later, Mallow found the back of the net for a third occasion. Ethan Crone charged forward with a fine driving run, before firing home with what was a fine strike to the corner.

Glynn kept the Mallow drive going with a well-taken score, as his side were in total control of the contest at the halftime break, with the score at 3-6 to Mallow compared to the 0-2 of Carrigaline.

Mallow picked in the second half where they left off in the first, as Alan Hogan got in on the scoring act, which was added to by an Eoin Murphy effort from a free.

Carrigaline found the back of the net through a Steve Gorman strike from close range, as Dave O’Regan slotted over the crossbar a few minutes later.

By this stage even early in the second half, they knew they had a mountain of Mount Everest proportions to climb if they were to turn this contest around.

Mallow dealt them another strong blow, as Richie Willis got on the end of a long pass into his path before blasting home from a few yards out.

Despite the best Carrigaline efforts, including a Kaelan Spillane free, there was to be no denying Mallow on this particular occasion.

Murphy was an inspirational presence right throughout for Mallow and with ten minutes remaining, he converted with another neat point calmly over the crossbar.

Jimmy Glynn chipped in with a late point for Mallow as the game reached the latter stages.

By this stage, the outcome of this encounter was long decided There could be few complaints with this final result, as Mallow were impressive throughout and were more than deserving champions.

Carrigaline kept going right up until the very end, but it was a case of Mallow being too good for them across all departments.

For Mallow this success, they will most certainly hope, is the catalyst for a strong 2021 for the club at all levels.