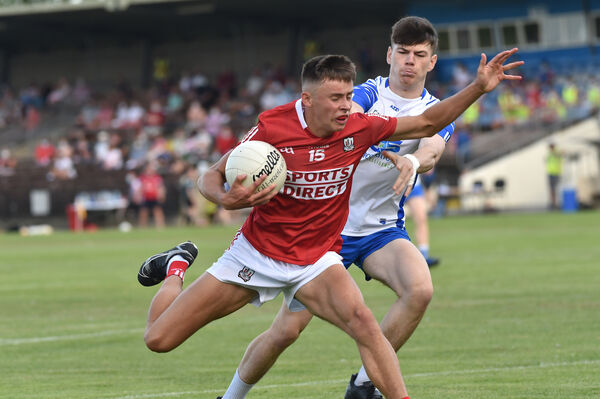 Courtesy of Mark Woods (The Echo)

CORK cruised to the semi-final of the Munster minor football championship with a facile victory over a weak Waterford side at Dungarvan’s Fraher Field on Wednesday evening.

It’s fair to say reigning champions Kerry will supply a much different challenge in next week’s semi-final, but at least Cork will have home advantage at Pairc Ui Chaoimh.

Despite the lopsided nature of the game and bearing in mind the quality of the opposition, Cork impressed in first of all winning primary possession and then using it sensibly.

Midfielders Rory O’Shaughnessy, joint captain with Hugh O’Connor, the lone survivor from last season, dictated matters around the centre and the forwards enjoyed a feast of ball their way.

Cork could afford to start emptying their bench during the third quarter withdrawing both O’Shaughnessy and O’Connor.

Well before the interval even, Cork had secured their passage to the last-four, leading at the short whistle by a whopping 24 points, 2-18 to 0-0, a reflection of the one-sided nature of the tie.

Cork started the rout after just 15 seconds, when joint-captain Rory O’Shaughnessy won the throw-in before the ball was worked into O’Connor who duly pointed.

Yet, Cork had a narrow escape a couple of minutes later, when their defence was opened up by a fine pass from Adam Murray only for Liam Lynch to drag his shot wide of the far post.

Cork then surged nine points in front by the first water-break as Corkery landed his first from his left boot in the ninth minute and O’Connor’s impressive tally increased with a ‘mark.’

Towering midfielder Michael McSweeney brought up the ninth point, but the break did nothing to upset Cork’s rhythm as Waterford again continued to come under constant bombardment.

Kelly began another onslaught of scores and still Cork needed the intervention of goalkeeper Mikey O’Connell to get his body behind a well-struck Sam Pender shot and out for a ’45, which was confidently held again by O’Connell, who was fouled in the process.

Corkery, off his right on this occasion, claimed Cork’s 12th point before the pacey O’Driscoll earned a double reward for his endeavours.

He took a pass from O’Shaughnessy after 24 minutes and finished impressively past keeper Dara Kavanagh for the opening goal.

And a minute later, the Castlehaven forward pounced for his second goal for 2-13 to 0-0, though, Kavanagh got some level of revenge by denying O’Driscoll his hat-trick with a brave save approaching stoppage time.

O’Connor’s seventh point crashed over via the crossbar and Waterford’s hopeless situation worsened with the black-carding of centre-back Ryan Hennessy, facing the opening 10 minutes of the second half with 14 players.

Despite their numerical disadvantage, Waterford managed to finally get on the scoreboard after 34 minutes with the first of Adam Murray’s pair of frees.

Cork, though, responded with 1-3, the goal coming from wing-back Darragh O’Brien, who finished with a scorching shot to the far corner of the net just before the second water break, 3-22 to 0-2.

Cork added further goals through O’Driscoll to complete his hat-trick and Niall Daly.

Subs: C Sweeney for O Gradaigh half-time, A Jacob for Power and T Martin for Leane, 44, M Long for Flavin 50, B Stuart for Lynch 55.