CORK swept to their second Munster U20 title by following up last week’s exciting win over Kerry with another impressive showing at Semple Stadium on Thursday.

And they did it without star forward Conor Corbett, who was injured during the first-half and didn’t make the second period.

But, the Clyda Rovers player was hardly missed as his replacement Sean McDonnell scored a wonder goal similar to Diarmaid Phelan’s super effort in the opening period.

Yet, the stand-out figure was vice-captain David Buckley, who tormented the Tipp defence all evening and was outstanding in his shooting, accumulating 10 in total.

Cork were nine clear 3-15 to 3-6, entering the closing quarter as Buckley continued his exemplary finishing and also created a ‘goal’ for Cahalane, but it was ruled out for a square infringement.

In the first-half Tipp stunned Cork with a couple of goals in three minutes after the visitors began confidently with three points in as many minutes.

But, then Tipp struck through captain Sean O’Connor after the towering Kevin Grogan won a ball in front of the Cork goal after six minutes.

And when Jamie Holloway’s low shot took a deflection en route for Tipp’s second goal, Cork found themselves 2-1 to 0-4 adrift by the 10th minute.

Grogan’s long-range free-taking helped the home cause as they led by 2-2 to 0-6 at the first water-break with Corbett requiring attention for a knee injury.

But, there was no denying the dominant side during the second quarter as Cork compiled 1-6 without response, taking full advantage of their superiority around the middle.

Buckley was unmarkable as Corbett found his groove too, but the goal came from a most unlikely source, full-back Phelan, who roamed forward to plant a goal-of-the-season contender in the 26th minute.

The Aghada player took a quick line ball to Dara Dorgan, who returned it immediately to Phelan, who, then went on a brilliant solo run and managed to keep his cool when the chance presented itself, firing a rocket deep into the net.

This was the first meeting between the counties in a final since the age group was changed from U21 four years ago.

Cork easily triumphed by 1-20 to 0-8 in the first round of the new U20 competition in 2018 before losing to Kerry in the final.

Cork and Kerry have dominated, contesting the three finals with the Kingdom 2-1 ahead, but Cork have now levelled. In the past the rivals won 26 U21 titles apiece.

Now Cork take on the Leinster champions Offaly in the All-Ireland semi-final over the Bank Holiday weekend.

On the other side of the draw, new Connacht champions Roscommon, who defeated Mayo in the final on Wednesday, meet either Monaghan or Down.

The Ulster final is put back a week following the tragic death of Monaghan captain Brendan Og Duffy in a car accident last week.

Subs: J Durcan for McKeown 23, B Kehoe for B O’Connor half-time, C English for Holloway 37, M Lyons for Comerford 48, K Costello for Walsh 60 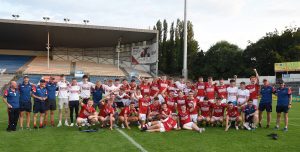