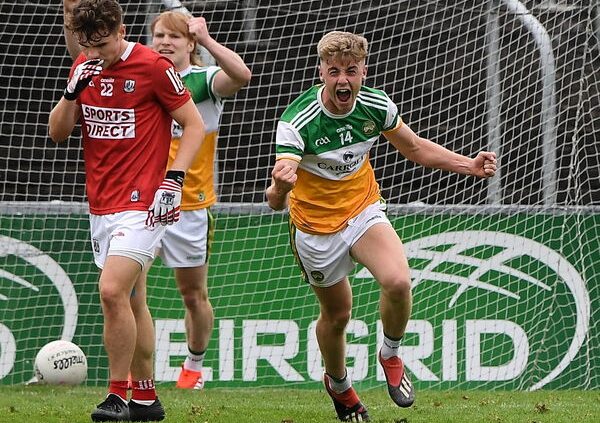 IT’S the minors who are the last Cork football team standing after mixed fortunes in a hectic 24-hour schedule at the weekend.

Their exciting 1-15 to 1-14 Munster semi-final win over champions Kerry at Páirc Uí Chaoimh on Friday night was followed by the disappointment of the U20s losing their All-Ireland semi-final to Offaly at O’Moore Park, Portlaoise on Saturday.

The Leinster champions deservedly won by 3-10 to 0-14 to deny Cork, who battled back from a wretched first-half display to come within two points approaching injury-time.

But, a third Offaly goal settled matters and, in truth, the winners could have scored six and their wides stretched to 13. Jack Bryant of Offaly celebrates after scoring the killer late goal against Cork during the 2021 EirGrid GAA All-Ireland Football U20 Championship semi-final. Picture: Matt Browne/SportsfileThe other U20 semi-final is between Roscommon and Down, who defeated Monaghan by 3-15 to 1-14 after extra-time on Friday night.

Yet, manager Keith Ricken was full of praise for his charges and believes the future is encouraging for football in the county.

“I loved the way we kept fighting right to the end and the lads died with their socks on,” he said.

“I believe seven or eight of these fellows will be household names in a few years’ time. There is no doubt about that.

“I make that judgement now on what I’ve seen and what I saw was a team who never, ever gave up. I’m very proud of that.”

Ricken was still proud of his players’ second-half efforts.

“We stood up in the second half and tried to answer the problems we created ourselves in the first half,” he said.

“Yes, we left holes at the back which they exploited with a bit of pace and some very good players. I genuinely thought we left it all out there in the second half.

They may not have done it in the first half for whatever reason. I think the crowd may have been a factor and things get to fellows.

“Yet, I thought they settled down and if you’re looking at what the future of Cork football holds in terms of character, there was no crumbling.

“We fell nine points down at the start of the second half and were really under the cosh, but nobody went into hiding.

“There was nobody faking injuries either and we had to pull players off the field when making changes.

“I’m very happy with that side of things and I think from my role in the development of Cork football we’ve done that again.

“I believe we will get a lot of players from this group and the hurt and pain from this evening will be used to their advantage.” Offaly now march on to the final against either Down or Roscommon.

“I wasn’t surprised by the way they played and I’ve been telling people that because Offaly were my tip to win Leinster.

“I’ve seen these guys play and they have a lot of pace and quite a lot of skilful players, who will punish you inside if they make a mistake.

“We started this campaign without six players who you would have thought would be starting but for injuries.

“So, for us to be still involved at the business end of the championship, I’m very happy with that.

“Of course, there were performances that were below par and the lads know that themselves, but I thought we worked very hard in the second half and I can’t ask for any more than that.”