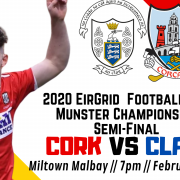 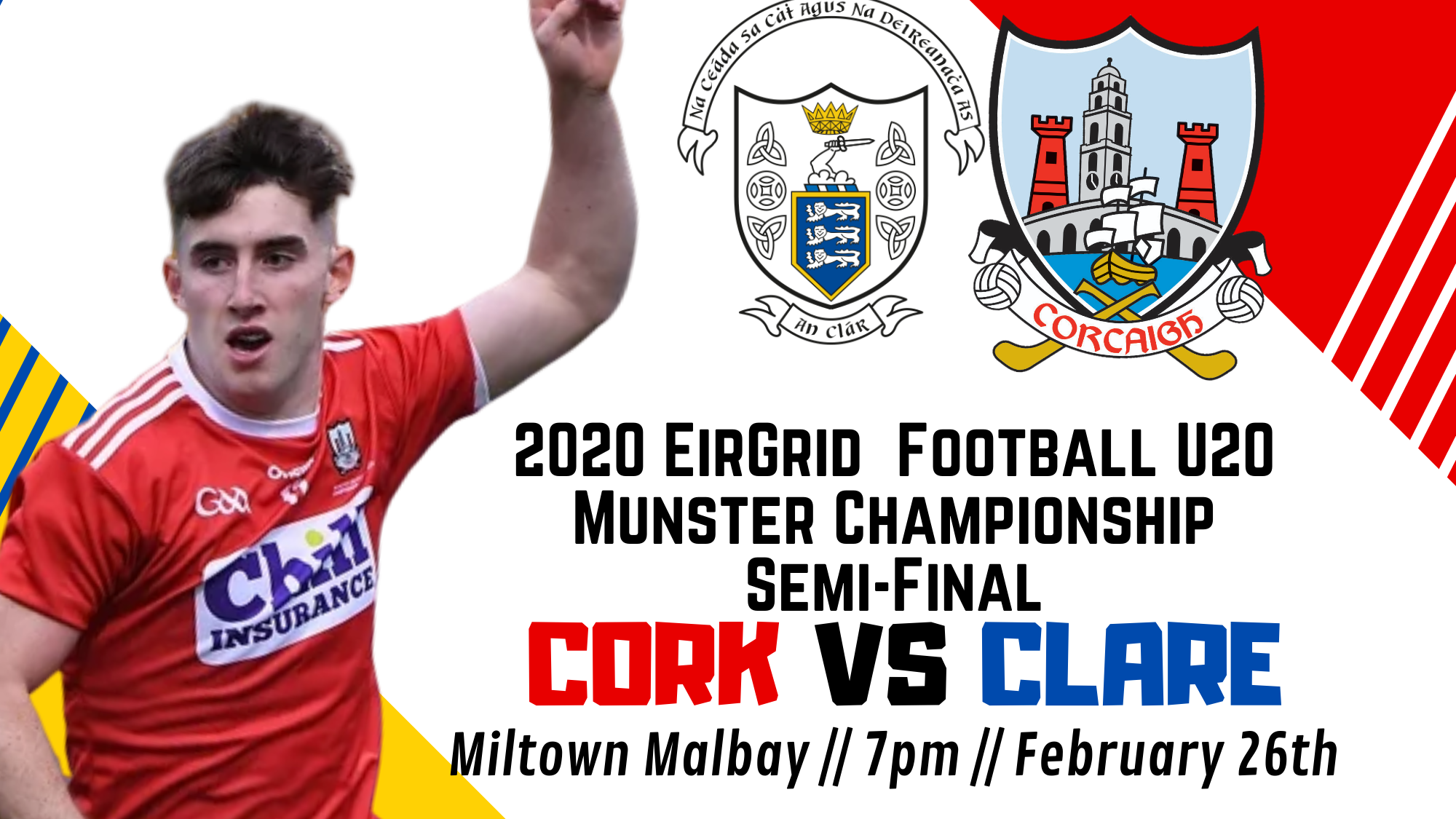 The Cork team has been announced here 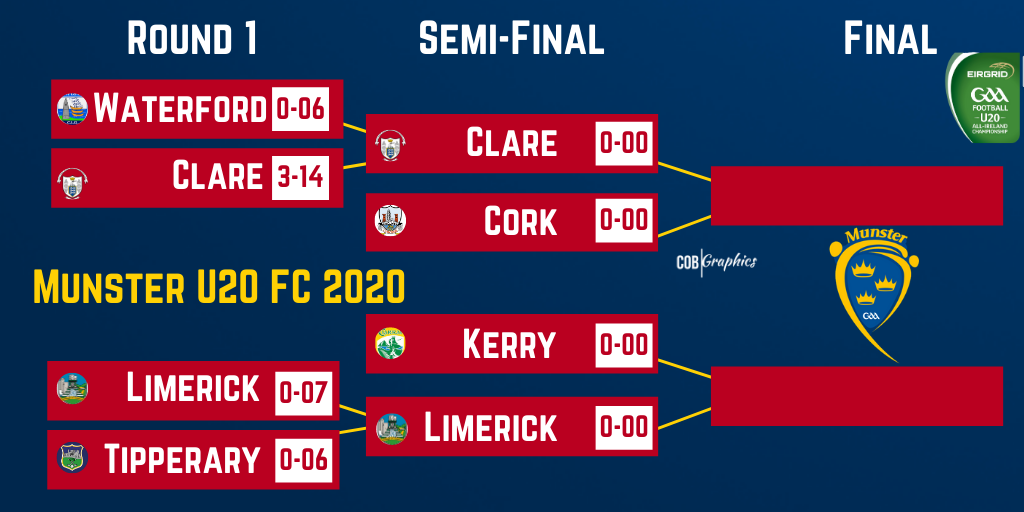 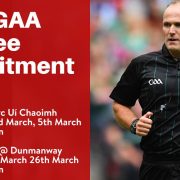 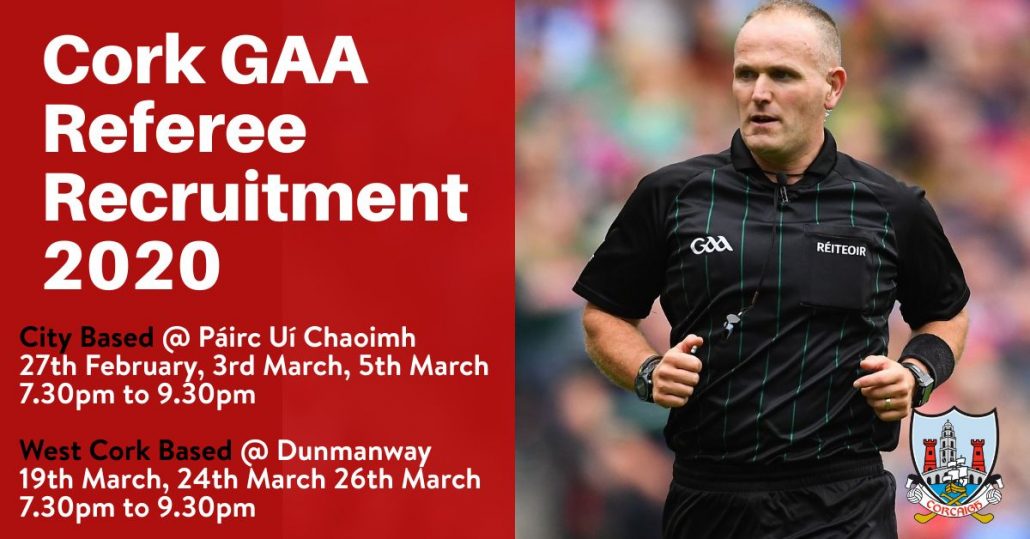 The Basic Level 1 Referee Foundation Course will be held in Páirc Uí Chaoimh on Thursday 27th February, Tuesday 3rd March and Thursday 5th of March from 7.30pm to 9.30pm.

If you are based in Carbery or Béara Divsions the course will take place on Thursday 19th March, Tuesday 24th March and Thursday 26th March in Dunmanway from 7.30pm to 9.30pm.

Applicants must be 17 years of age or older to take part in this course. The link to the application is http://tiny.cc/CorkGAA2020RefereeCourse

The Cork Under 20 Football Team to play Clare has been announced. 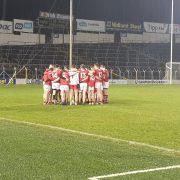 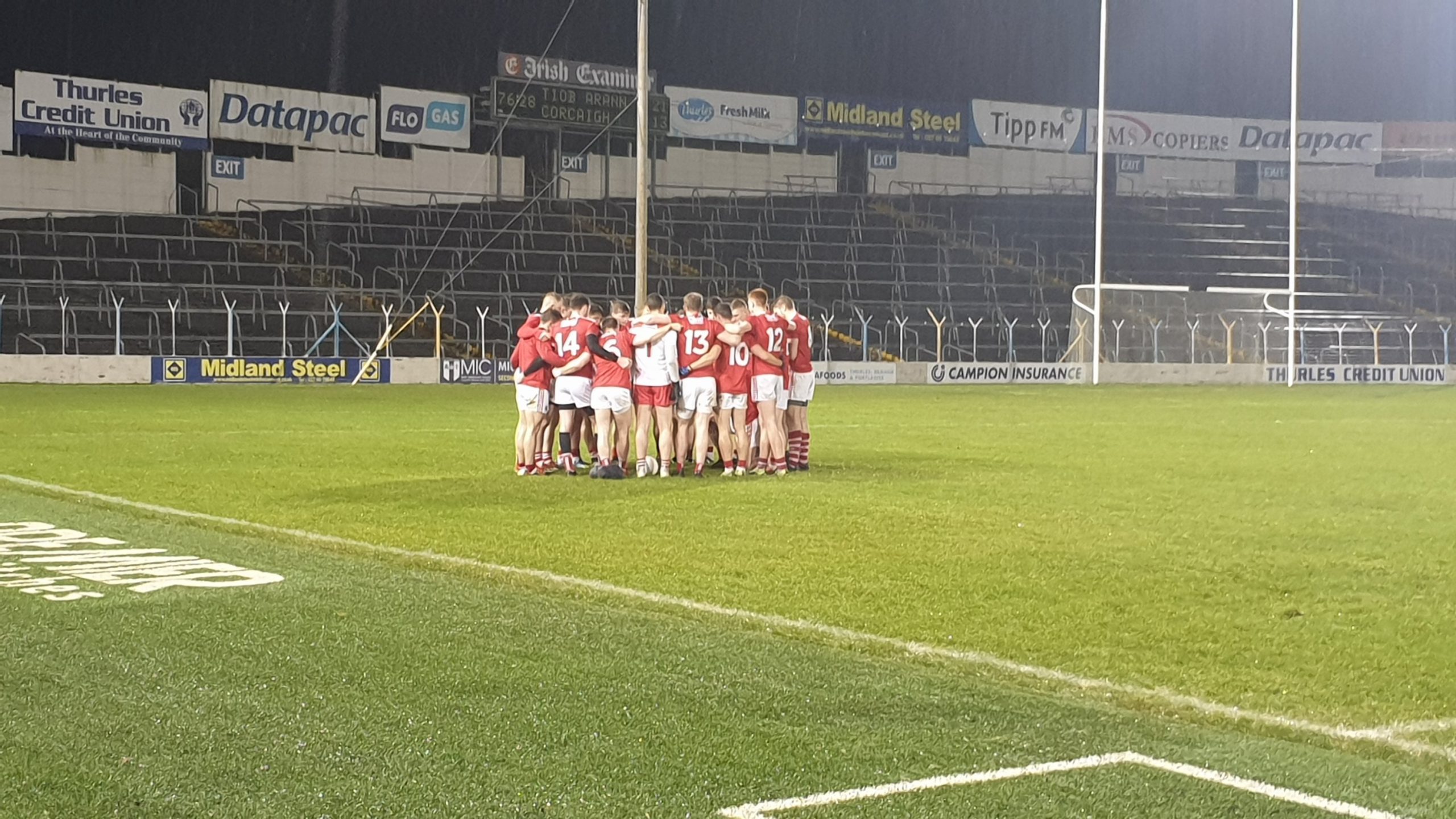 CORK HAD TO stage a second-half comeback to preserve their perfect start to their Division 3 football league campaign as a brave Tipperary effort came up just short tonight.

Tipperary managed just 0-26 in their opening three games but while they came within five points of that total in front of a crowd of just 875, it wasn’t enough to prevent a second loss of the campaign.

But David Power’s men will take a lot of encouragement from a good display which came up short when Luke Connolly twice found the net in the second half.

Tipperary hit the ground running in perfect conditions at Semple Stadium and deservedly led by 0-5 to 0-0 after just ten minutes.

Riain Quigley marked his senior debut with a point after just 70 seconds and they pushed on from there with Steven O’Brien, Emmet Moloney, Sean O’Connor and Colman Kennedy hitting the range.

Cork, who kicked four wides in the opening eight minutes, finally got off the mark when Mattie Taylor scored after ten minutes, with Cian Kelly quickly adding another.

Tipperary hit back with efforts from Conor Sweeney and Quigley but then after John O’Rourke pointed for the Rebels, Ruairi Deane found the net and Cathail O’Mahony pointed to level at 1-4 to 0-7 after 26 minutes.

The Tipp response was excellent and they hit the next five points before Cork cut the gap before the break through O’Rourke and O’Mahony to trail by 0-12 to 1-6.

Kennedy and Liam Boland extended Tipperary’s lead after the restart before Connolly neatly slotted home a 41st penalty after Taylor was fouled by Quigley to cut the gap to 0-14 to 2-6.

Cork got the deficit down to a point by the 48th minute and then Connolly struck for his second goal to put them ahead for the first time in the game, with substitute Ciaran Sheehan quickly adding a point to lead by 3-10 to 0-16 going into the final quarter.

Sweeney and Brian Fox responded for Tipperary but two more points from Connolly and one from O’Mahony left Cork leading by 3-13 to 0-18 with seven minutes left and they held on for victory even with Ciaran Sheehan black-carded on the hour as a late Tipp rally came up just short. 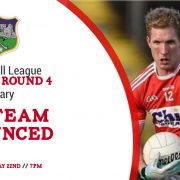 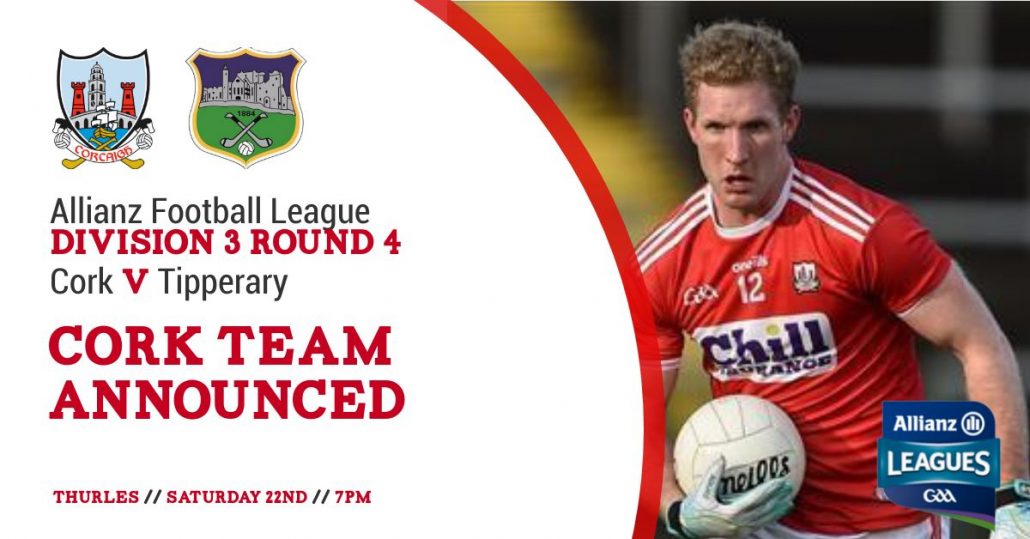 The Cork Senior Football Team to play Tipperary in Round 4 of the Allianz Football League has been announced. 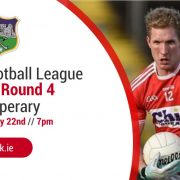 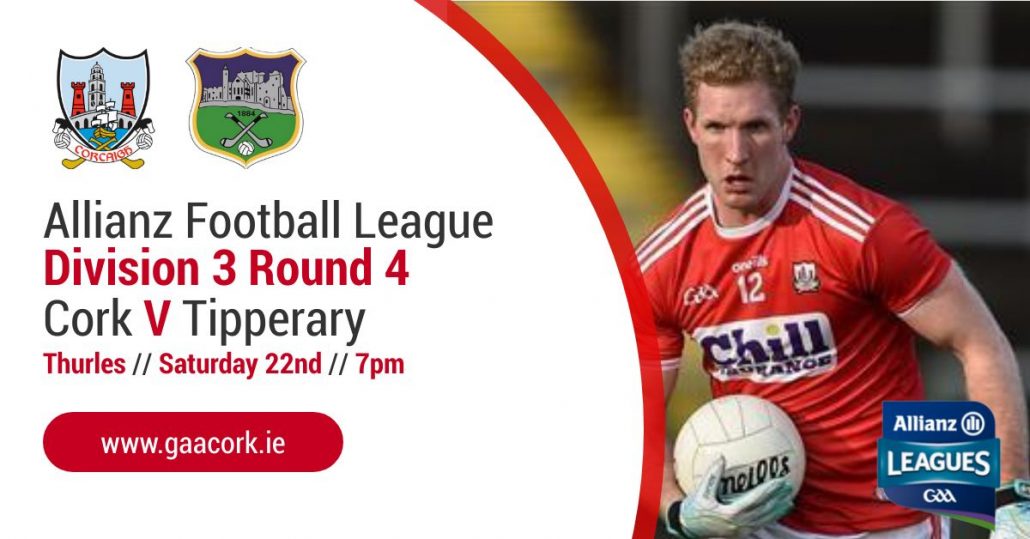 Cork will play Tipperary in Round 4 of the Allianz Football League Division 3 on Saturday February 22nd at 7pm in Semple Stadium Thurles.

Cork Footballers have recorded three wins in the league this season, beating Offaly, Leitrim and Down.

Cork Team to play will be announced later this week on www.gaacork.ie

Tickets for the game are available online at www.tickets.ie or at your local Super Valu and Centra store. 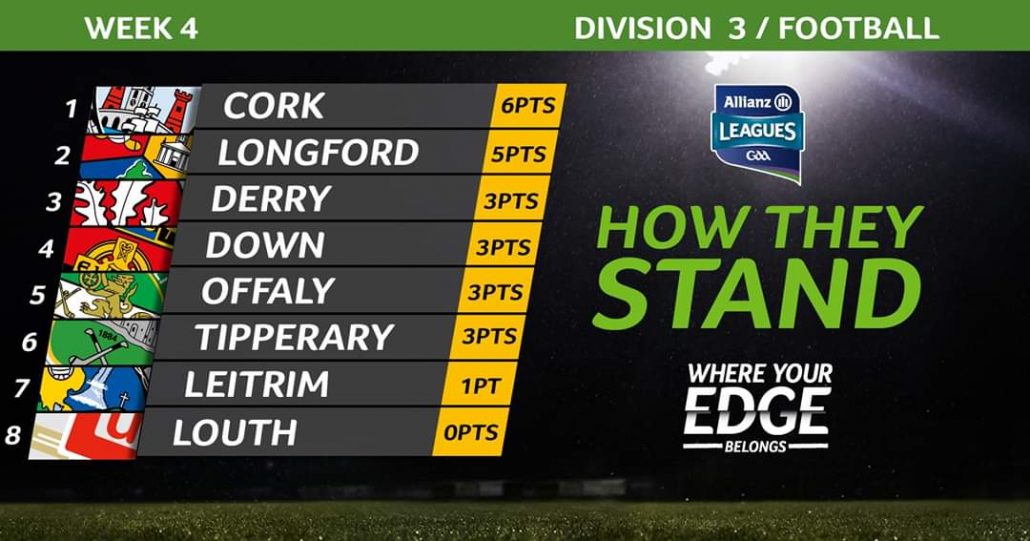 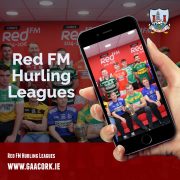 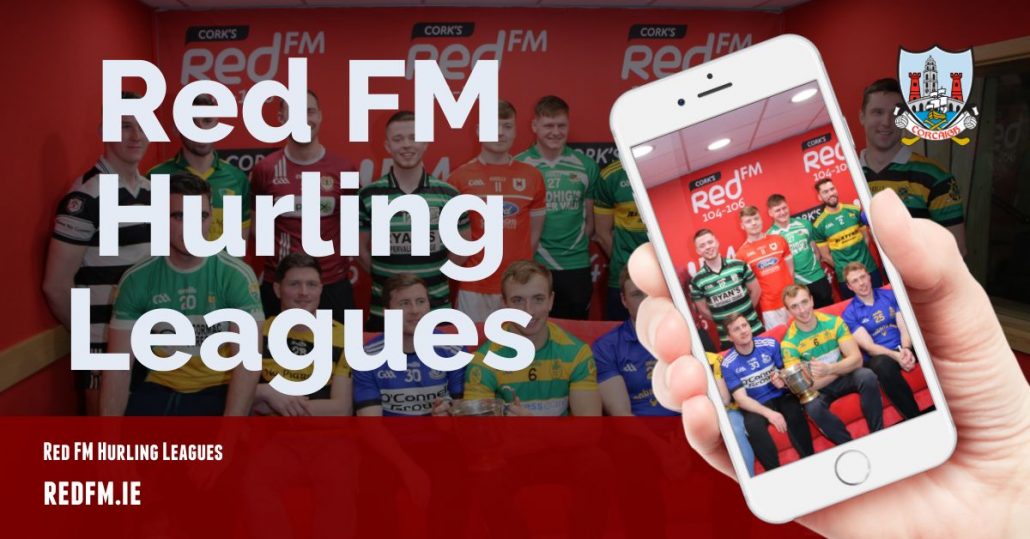 The opening weekend saw a lot of games called off due to Storm Dennis in the RedFM Hurling leagues.

For some clubs, Round 2 will be their opening games in this seasons competition. Below are full fixture details for the week ahead. Their will be also some football games in the Rochetown Park Leagues this weekend as well.

Click on the league name to view the full details for the league with fixtures, results and club information. You can also check out what other games are taking place for your club by clicking on their name. 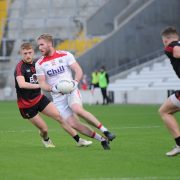 A FREEZING FEBRUARY afternoon in Páirc Uí Chaoimh culminated with Cork coping with the obstacle of having to play the closing stages with 13 men and collecting the brace of valuable league points on offer at the expense of Down.

Sean White’s 55th minute dismissal for a second yellow card removed a key player from the Cork side and then with their full set of subs employed, Kevin Crowley had to withdraw through injury in the 70th minute.

At that juncture Cork were in front by five points and they protected that position to maintain their promotion charge, aided by Down’s wayward shooting late on as they chalked up five injury-time wides.

Cork were good value for their latest success, 11 different players chipping in on the scoresheet and captain Ian Maguire particularly influential as the second half wore on. It was 0-8 to 0-2 in their favour at the interval and while Down began brightly after the second half, Cork got their running game going to reel off a succession of points that pushed them clear.

Cory Quinn got in to boot home a 66th goal that raised Down’s hopes as they cut the gap to four yet they failed to add to their scoring tally after that to come close to staging an striking revival. Luke Connolly swung over an exquisite point from a 68th minute free on the right wing for Cork and that transpired to be the last score of the game.

The opening period followed a set pattern of play, largely unfolding in the Down half of the field as Cork harnessed the elements to control possession. Cork got plenty of joy on Down’s kickout and when the Mourne men did manage to raid forward, Cork’s defence tackled smartly with Kevin Crowley putting in a couple of key turnovers. Down were restricted to just two scores, Donal O’Hare and Owen McCabe at either end of the first half.

Paddy Tally’s side were highly organised and energetic in closing down the space available to the Cork forward line. Six different players contributed to Cork’s tally, half of which came from frees that they managed to draw from hard runs. Thomas Clancy and Brian Hartnett popped up with impressive scores from distance. They created one clear goal chance after a surging break from Sean Powter carved open the Down rearguard in the 14th minute but Ciaran Sheehan fired in an effort from a tight angle that flew across goal past the post.

Down got scoring joy early in the second half through Darren O’Hagan and Paul Devlin to give them some impetus as they cut the deficit they faced, 0-9 to 0-4. But Cork strung together some of their best passages of play then with Liam O’Donovan, Damien Gore, Cathal O’Mahony, Tadhg Corkery and Maguire all contributing impressive points. They came close to hitting the net in the 51st minute with a sweeping team move but Colm O’Callaghan’s blasted effort was smothered by goalkeeper Rory Burns.

0-14 to 0-5 clear entering the final quarter essentially settled the issue but they needed to stay focused after the sending-off of White and the concession of that Quinn goal. Down came pouring forward in those closing moments yet their shots were rushed and sailed wide of Micheál Martin’s goal. Cork’s unbeaten run continues, next up for them is a trip to Thurles on 22 February while Down host Longford on the same night 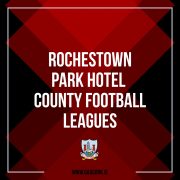 Games will take across Divisions 1 to 5.

The 2020 football leagues are sponsored by Rochestown Park Hotel.

Below are the full fixture list for this weekend.

Check out who your club are playing. 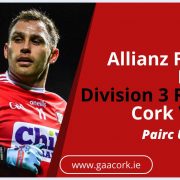 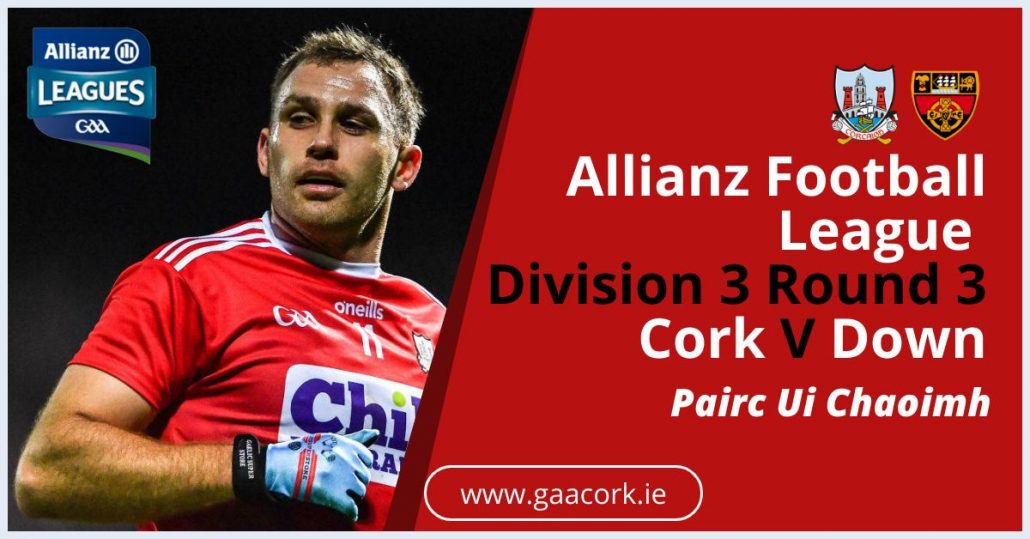 Next up for Cork footballers is a clash with Down in what will be repeat of the 2010 All-Ireland final. The game will take place in Pairc Ui Chaoimh at 2pm on Sunday next, 9th February.

Gates open at 1pm and tickets for the game can be purchased in selected SuperValu and Centra stores.

Both teams are targeting promotion this season, it promises to be an exciting contest. They last met in the Allianz Football League two years ago when Cork won a Division 2 tie by six points.

Cork have registered two wins so far this season, with wins over Offaly at home and Leitrim away.

Cork side for the game will be announced later in the week.

Players that have played in our opening games 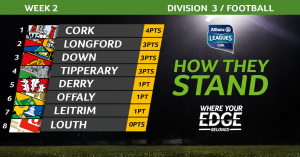