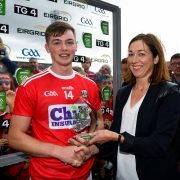 Cathail was a Cork Minor Footballer in 2016 and 2017 before going on to be joint captain when Mitchelstown CBS that won the Munster Senior B Hurling Championship.

In 2019 Cathail played a huge role for Cork in their march to Munster and All-Ireland Under 20 Football glory. His display of point scoring from play and frees was of the highest quality and his tally of 2 goals and 20 points over the campaign showed him as a player with wonderful talent.

It culminated in him being named Man of the Match in the All-Ireland Final victory over Dublin and later being named at full-forward on the EirGrid Under 20 Football team of the year.

2019 has certainly proven to be a standout year in the Senior Inter-County career of Cork’s Melissa Duggan. A member of the Dohenys club in Dunmanway, Melissa won a first National Ladies Football League title in May of this year when Cork defeated Galway in the Division One decider. As a result of numerous eye-catching performances over the course of the league, Melissa was named at left corner back on the Division One Team of the League.

In June, Melissa claimed a second Munster Senior Ladies Football Championship medal following Cork’s victory over Waterford. Cork bowed out of the All-Ireland Senior Championship at the semi-final stage to the eventual champions Dublin. However, Melissa’s individual excellence throughout the Championship saw her receive a first All-Star award recently. Club success was also to follow this year as Melissa helped Dohenys to win a much coveted County Junior title in October. To complete a remarkable year, Melissa captained Munster last weekend to a second Ladies Football Interprovincial title in a row, a feat last achieved in 2004.