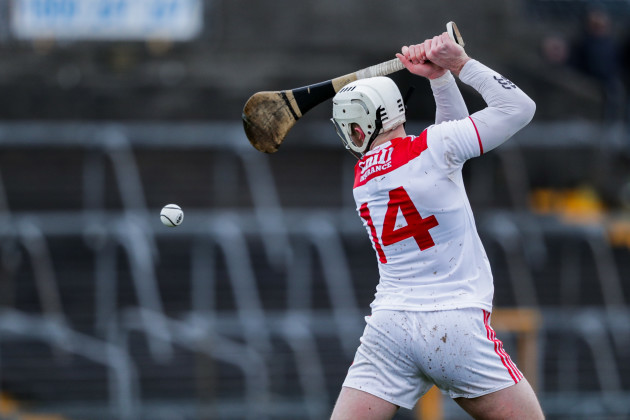 Cork’s Hurlers survived a scare from Westmeath to pick up their second win of the national league, in what were awful conditions.

Westmeath were outstanding and brought a huge intensity to the game, with the hosts showing far more desire than their Munster counterparts and Shane O’Brien may see this as a massive opportunity missed.

Patrick Horgan was excellent for Cork and only for him they would have been in real trouble, as his accuracy from place balls was the game’s deciding factor.

Westmeath responded well however, as Shane O’Brien’s side scored four points in a row, with Allan Devine (3) and Joey Boyle finding the target, as just two points separated the teams.

A marvellous sideline cut from Tim O’Mahony on the stroke of half-time turned out to be the final score of the half, as Kieran Kingston’s side went into the interval with a 0-8 to 0-5 lead.

Cork were awarded a penalty shortly after the break, as Horgan was fouled and the Glen Rovers sharpshooter made no mistake with the finish to give his side a six-point lead.

It was cancelled out almost immediately however as a “65” from Devine made its way into the back of the net to halve the deficit and bring Westmeath right back into the game.

Derek McNicholas’s score then made the deficit two, before both sides were reduced to 14 man, as Damien Cahalane was shown a straight red card, which was followed by Joey Boyle’s second yellow card.

It was tit for tat until the 55th minute, when a long ball from Bill Cooper made its way into the Westmeath net to stretch Cork’s lead to five. Two Westmeath points left three in it, though Cork were awarded another penalty after Seamus Harnedy was fouled and Horgan again found the net to leave six between the teams.

Three Allan Devine frees gave Westmeath some hope, though a late free from Horgan turned out to be the final score of the game as Cork held out for a four-point win.

Cork will host to Limerick next weekend, while Westmeath will travel to face Tipperary with a glimmer of hope after an excellent display.