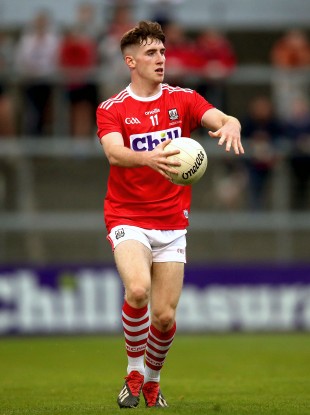 BLAKE MURPHY WAS top scorer as Cork eventually advanced to their tenth consecutive Munster decider but only after receiving a real scare from hosts Clare in Miltown Malbay this evening.

In front of a rain-soaked 830 attendance, the Rebels’ first defence of their provincial and All-Ireland U20 crowns was a nervy affair that never seemed comfortable despite holding a six-point cushion entering the final five minutes.

With six of last year’s winning team on show, Cork did begin both halves with confident unanswered surges, kicking 1-2 in the opening 11 minutes of the contest before surpassing that feat on the turnover with a seven point third quarter burst.

However each time they were met head on by an admirable show of defiance from the home side who first rattled off two goals to inch ahead by the break before also kicking the last four points to tee up a grandstand finale.

Led by joint-captains Blake Murphy (0-9) and Mark Cronin (0-2), Cork just about merited their progression to a fifth straight final against Kerry next Wednesday in Tralee (7pm). However, they will require much improvement if they are to double the dose on their oldest rivals after an inconsistent display.

They certainly started in buoyant mood when Blake Murphy’s early brace of frees was capped off by an opportunist goal for Jack Murphy who benefitted from a defensive error to fire to the net from the edge of the square at 1-2 to 0-0 by the 11th minute.

A chastened Clare finally settled with a Shane Meehan free before getting a major shot in the arm at the turn of the opening quarter when Mark McInerney intercepted a kick-out and played the ball through Meehan to the waiting Emmet McMahon to billow the net at 1-2 to 1-1.

Murphy and Cronin points sandwiched another glorious goal opportunity for the visitors, only for Cronin’s effort to be stopped by full-forward Fionn Herlihy whose subsequent attempt was also denied by John Murphy.

A relieved Clare would take full advantage as Mark McInerney raided for 1-1 to inch his side in front at 2-2 to 1-4, the goal a superb patient team move that handed the hosts a minimum half-time lead.

With a chance to regroup, Cork stormed into the new half, with Murphy’s five placed balls punishing increased Clare indiscipline to ease 1-11 to 2-02 entering the final quarter.

That six-point cushion was still intact by the 55th minute but there would be one final backlash from the Banner as McInerney (2) and Emmet McMahon toppled the deficit to three by the 61st minute before a last gasp attempt at an equalising goal just cleared the crossbar for Eoin Rouine.