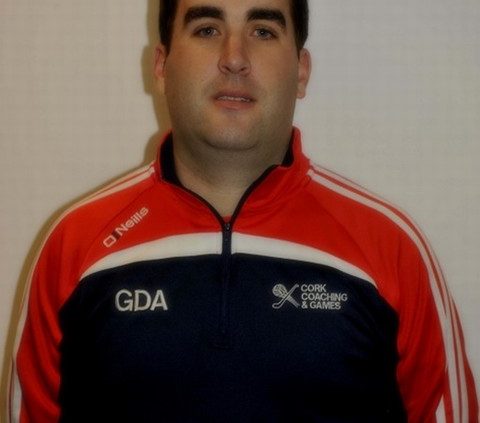 The area I cover is Cork City south side clubs and clubs just outside the city, I have also I’ve being filling in as the GDA in East Cork the last few months with Shane Supple after moving onto full time administrator of Rebel Og.

Before the lockdown in my job I was supporting clubs with Coaching workshops focusing on fundamental skills and exercises for younger age groups. Also, this is the last year of the benchmarking program so I was meeting clubs to put plans in place for the season and try and improve on previous years.

During the lockdown we have being running a lot of online content for coaches and players across the county. My main role is the running of online Foundation courses every week on Mondays and Thursdays with and average of 40 coaches a night logging in across the county. I have worked closely with Shane Supple Coach education coordinator and the GDAs from each area when rolling the courses out.

We are also working hard at the moment putting training session templates in place for clubs to use when training can resume sometime in the future taking into account the social distancing that could still be in place.

My main area of work in the development squads is to oversee the East Cork region in both Hurling and Football at U14 level.

U14 Hurling – We have 86 players on the Hurling panel with 3 hurling squads in East Cork. Along with help from Brendan Healy, Pat Walsh, Fergal Condon, Derek Barrett and James Nyhan we had done a number of sessions already in Lisgoold back in January and February with the players working on improving the basics, breaking the tackle and High ball.

U14 Football- We have 57 players on the East Cork Football panel with 2 teams for the year playing games across the county and outside the county later in the season. We have had a number of matches and sessions already overseen by Conor Murphy, Brendan O Riordan, Coleman O Driscoll, Jim Crowley , Con Leddy and Padraig O Connor with support from Conor Counihan.

I have being also supporting Paudie Murray Cork U15 Hurling manager with the East Cork squad who were starting to get up and running for the year with a few practice games before the lockdown. They are getting online physical and skills programs for the moment.

I have being helping schools that have very big numbers particularly at U14 level with coaching support and also running  Blitz/tournament for them in Hurling. We had run our first blitz up on Monday Ag in February with another 2 days to follow. The idea of the tournament/blitz was to allow schools enter multiple teams for players not getting games on the 1st teams. The response from the schools was very positive and we look forward to again running this in the future.

I have also being helping schools with TY course. We had just started a new art course with all the transition year students in Carrigtwohill Community College. It was a 6 week program with assistance from Niall McCarthy. The students were visiting the local primary school Scoil Chliodhna CNS coaching the kids in fundamental exercises and skills. Unfortunately we did not get to run the 6 weeks with the lockdown. The response from it from both schools was hugely positive and it is hoped that it will continue into the future.

During lockdown I have being put on a Munster GAA group reviewing activity across the province at post primary level and also coming up with any new programs that could be run to assist schools in promoting our games.

I have being busy working with club coaches that visit primary schools. I also helped a number of schools with indoor hurling blitzes at the start of the year in Carrigtwohill Community hall.

Carrigaline CC and Midleton CBS planed on hosting primary school blitzes in April. I was coaching and setting up coaching visits with local schools.

We have also being supporting schools that registered as 5 Star Centres for 2019/20. With coaching and any additional support required.