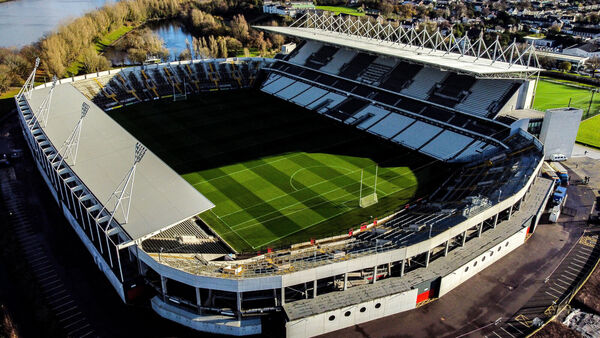 Ciarán O’Regan provides the music in Páirc Uí Chaoimh on match days, leaning on his experience with Red FM. Counting down your top 20. He spoke with The Irish Examiner

1: It’s a long enough day. I’ve to be there two hours before the game, really, because there has to be music playing before the gates open to let people to come in.

There are speakers set up outside the stadium and people gather and meet there before coming in — when there isn’t a pandemic, obviously — so you want to build the atmosphere for them.

2: We don’t have any guidelines from Croke Park. There were (guidelines) one time, and basically it had to be Irish music played in the stadium.

There were ways around that, though. The Rihanna and Calvin Harris song, We Found Love, had its video filmed in the North of Ireland, so that went down as an ‘Irish’ song, technically.

Other songs with Irish producers, or Irish members of the band, would also qualify. One Direction would qualify because Niall Horan is Irish.

3: A couple of years ago Michael Byrne, the event controller in Pairc Ui Chaoimh, asked me to get involved: He was saying he wanted upbeat music to create an atmosphere. In the last few years Limerick and Thurles would have been playing music that wasn’t Irish in any shape or form, so we followed suit.

4: Last year for Cork-Kerry in football I was going to line up ‘Thunderstruck’ for after Kerry came out — there were about 40 seconds until the beat kicked in, so I was thinking the crowd would be building up nicely, then Cork would come out . . . it was all timed to perfection to give Cork a boost, all worked out, but of course there were no crowds at all because of Covid so it didn’t work as well.

5: Because there were no crowds we probably had a bit more leeway than usual last year. We do our own thing with the music as a result, more or less, but if there’s one place it has little enough impact it’s out in the middle of the field.

On the pitch itself, you can’t really hear anything because of the way the speakers are fitted — they’re facing into the stand.

6: The only complaints we ever get really are from stewards, that the music is too loud, but there’s more to it than that.

The speakers in the Páirc are all at the same level and we can’t change them, we’ve gone to the amp room to try to change them but we can’t.

If you’re walking up from the lower tier to the premium section of the South Stand, there are speakers in that concrete area and the noise really reverberates there, it’s very loud. It’s the same level as the speakers on the roof, but the latter don’t sound as loud because they’re so high up.

The ones down in the concrete area of the stand are very loud and stewards have to man that area for the whole day. I appreciate where they’re coming from when they say it’s too loud, absolutely.

7: One other issue is the TV studio in the North Stand because it’s an outside studio, close to the speakers, whereas the studio in the South Stand is soundproof.

8: We had teething problems, obviously. At the start, the music we were playing on the speakers also played in the dressing rooms.

When one particular reporter was giving out about The Cranberries’ ‘Dreams’ playing three or four times in a row one day, that was being piped into the dressing rooms as well, but that’s been fixed since.

When I’m not there Terry Brady, the IT officer, steps in and he’s very good. We work off one playlist — it’s private, you can’t look it up — and whoever is on plays the national anthem.

9: The anthem is a bit nerve-wracking because obviously you don’t want to mess that up, you want the anthem to play properly. If I’m playing everything on level 20 according to the laptop, the anthem goes up to level 50. That’s loud but the TV cameras can pick it up at least — there’s no feed directly of the anthem into the cameras.

10: The fanfare when teams come out in Croke Park, we wanted to use that so it’d be uniform across the stadia, but we couldn’t get it because Croke Park wanted to keep it unique and distinctive for the national stadium.

We thought about using the Barrack Street Band, to record them playing a fanfare and then use that for the teams coming out onto the field, but it didn’t work out in the end. In any case we sorted out a different fanfare.

11: Everything is timed to the second on match day. If a manager has his lads revved up he’ll let them out 30 or 40 seconds earlier and people don’t notice, but we’re trying to make sure the music isn’t cut off, to get the fanfare right for when the players come out, cueing up the anthem so it starts and ends just at the right time before throw-in.

In Croke Park there are cameras in the tunnel leading to the dressing rooms, so the control room lads there can see when the players are coming out.

That’s another reason we’re down on the sideline, because we don’t have that facility. We have someone with a walkie-talkie running from one end to the other to tell me when the teams are coming out so we can announce that and play the fanfare as they come out of the tunnel.

12: We don’t take requests, no. Not in Páirc Uí Chaoimh, anyway. The music varies from stadium to stadium — you’ll hear very old-fashioned stuff in some venues while we’d play stuff that’s recent enough.

After every Munster final, say, you’d play a song for the winning county. I’d waited a couple of years until last December for a chance to play ‘The Banks’ after Cork won a title, when they won the U20 hurling final against Tipperary.

13: A couple of years ago Kerry beat Cork in the Munster football final, so I played ‘The Rose of Tralee’ after the minor final and the senior final because Kerry won.

Some people on Twitter went bonkers over it, saying we should have played ‘The Banks’ and ran them out of it. I was back on Red FM that evening and explained the reasons why.

It’s the right thing to do, and all the stadia do the same.

14: I’ve played ‘Slievenamon’, ‘The Rose of Tralee’, ’The Banks’ — if Limerick won a title in the Páirc it would either be ‘Limerick You’re A Lady’ or ‘Garryowen’ or The Cranberries’ ‘Dreams’.

Which reminds me, we haven’t had Clare or Waterford winning a title yet in Páirc Ui Chaoimh, so I’ll have to make sure we have songs lined up for them. Tipperary, Cork, and Kerry have very recognisable songs.

15: By the way, that Cranberries song is the Limerick team song. Last year when the dressing rooms weren’t being used, the teams got ready in the concourse area so you could hear the music they were playing to get themselves ready, and Limerick were playing ‘Dreams’ before the game. And it was as loud as anything we’d play ourselves in the stadium.

16: Tipperary play ‘Right Here, Right Now’ by Fatboy Slim, another song to build fellas up. It’s a good song, but it’s a Tipperary song, and if you played that before a Cork-Tipp game in the Munster hurling championship you’d be teeing up Tipperary, even though most of the people in the stadium wouldn’t be aware of that.

Every team has their own music selection, and you could hear that, obviously, when they weren’t in the dressing rooms last year.

17: There are other ways to appeal to as many people as possible. A lot of people will know the song ‘Insomnia’ by Faithless, for instance, but there’s a remix with a Celtic feel to it, so I often include that.

The people who know the original recognise that, but the people who prefer traditional music have something they’ll like as well.

18: The mix in the crowd is something you have to be aware of. I like All Tvvins’ ‘Darkest Ocean’, for instance, but there’s some cursing in it, and you don’t want parents coming up to complain, or TV, so you have to watch out for that, too.

In fairness, people aren’t bringing their kids to a match for that.

19: Sometimes you can throw something in to see if it catches on — Peter Bjorn and John’s Young Folks is an incredibly catchy song, and I’ve played it on occasion just to see if people are whistling it later on in the day. And that’s happened a few times.

20: Overall you have to be safe, for want of a better term. As I say, it’s a very diverse crowd, when there is a crowd.

But I play as much Cork as I can — The Sultans of Ping, The Frank And Walters. It’s a Cork venue after all.