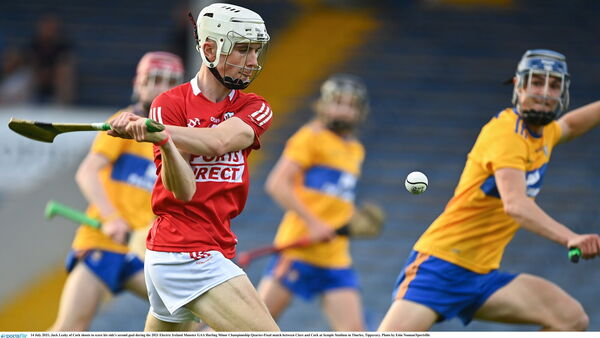 Courtesy of Denis Hurley (The Echo)

THE feel-good factor in Cork underage hurling continued in Semple Stadium on Wednesday night as the Rebels eased into the semi-final of the Electric Ireland Munster Minor Hurling Championship with a comprehensive win over Clare.

In the wake of the All-Ireland U20 win at the weekend, hopes were high that this crop could get their campaign off to a positive start and they did that.

While manager Noel Furlong and his backroom will be keen to impress upon the team that all that was won was the right to play Limerick next Tuesday week, there will be satisfaction with the way the high levels were rarely allowed to drop.

Full-forward Jack Leahy was eye-catching with a phenomenal tally of 3-8, but he led a strong ensemble cast.

The way Cork started was reminiscent of the opening stages of U20 final, albeit at a slightly slower pace. Tadhg O’Connell’s point had them off the mark inside 70 seconds, and by the sixth minute, it was 0-4 to 0-0 as his Ballincollig clubmate James Dwyer, Leahy and Diarmuid Healy all pointed. However, just as impressive as the attacking output was the application at the other end that showed Cork were properly keyed in as a team – Darragh O’Sullivan got a good challenge in to deny Conor Whelan passage while Timmy Wilk made a strong block on a Seán Rynne effort.

Cork played Leahy and Eoin O’Leary inside with William Buckley drifting as Mikey Finn dropped deeper from midfield. That could have allowed Clare’s extra manpower in defence to be a factor but good diagonal deliveries ensured that it didn’t become one.

Leahy got his second and Cork’s fifth point on 11 and Buckley got off the mark before an O’Connell turnover led to an Eoin O’Leary goal-chance, saved by Adam Enright in the Clare goal.

However, Cork’s six-point lead at the water-break was soon cut in half as the Banner County came back with renewed impetus, converted into points from Niall O’Farrell, James Organ and a massive Whelan free. It was as close as they came, though, with Cork rediscovering their momentum and making a decisive move before half-time.

Another fine Buckley point ended the 10-minute period without a score for Cork and that was immediately followed by the first goal as Healy’s well-directed pass allowed Leahy to take Shane Woods on the outside before firing home from a tight angle.

Immediately after that, centre-back Ben O’Connor – who was imperious all night – slalomed through the Clare defence and fed O’Leary. While Enright denied him, Leahy was on hand to divert the loose ball to the net for a 2-7 to 0-3 lead.

After points from Healy and Ben Nyhan, Cork had their third goal as O’Connell’s pass set up Leahy for a fine finish after a great move.

Further scores from Dwyer – his second – Mikey Finn, sub Ross O’Sullivan and the ever-efficient Buckley pushed Cork further clear though they did have to be thankful to goalkeeper Paudie O’Sullivan for a save from James Doherty.

Just before the water-break, sub Adam Walsh marked his arrival with a well-taken goal, set up by O’Sullivan. Then, after Niall O’Farrell got Clare’s first point since the 30th minute, Walsh struck again, Healy the provider on this occasion.

Clare’s cause wasn’t helped by the dismissal of Woods in the final quarter for a second yellow card Cork’s serene progression continued. O’Sullivan showed lovely skill to get the sixth goal after Walsh repaid the favour to him.