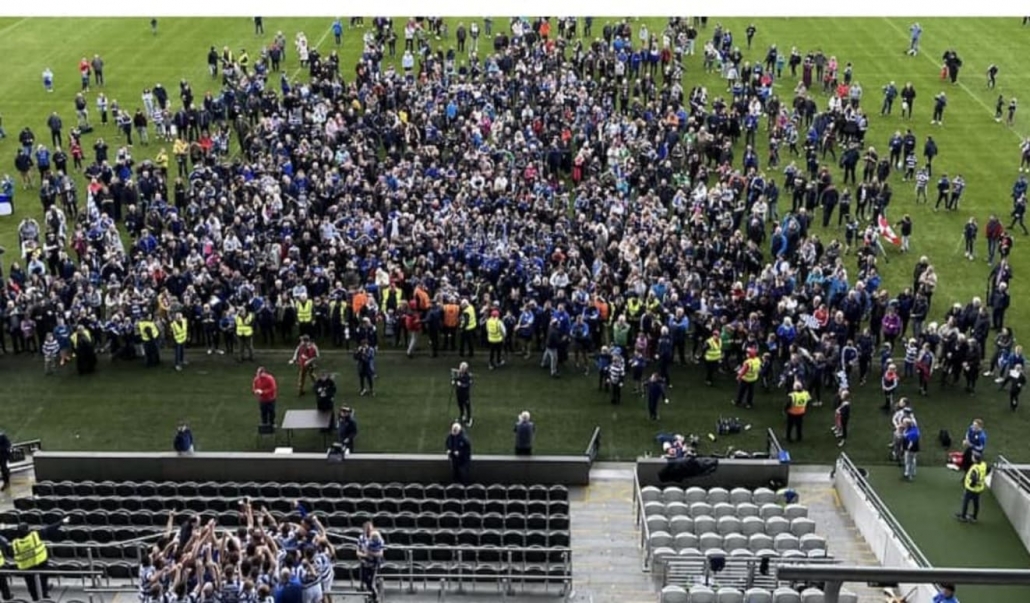 By Cian O’Connell for gaa.ie

The fact Inniscarra possessed such promise and potential meant recent championship defeats at adult level were even more painful.

Inniscarra chairperson Liam Linehan knows all about the challenges faced on and off the field. Involved as manager previously, Linehan is happy to be involved in an administrative role and is fully aware of the work being carried out in the juvenile ranks.

“That has been the history of the club for 20 or 30 years really, we have always done well at underage, we have played at a high level premier one and premier two level with most of our underage teams bar a few,” he responds.

“It was always the predicament and it was always said why can we not carry the teams that promised so much underage when we went into adult level, that we never delivered. That was always a bugbear for people within the club.”

Paul McCarthy and his management team steered Inniscarra to glory. “Like any club we would lose players, but the talent was always there,” he adds. “It just took something different to get it out of the lads. We had outside managers before, we just didn’t get to the holy grail. This time having the promise of the underage players finally fulfilling their potential was very satisfactory.

“There is a lot of work gone into underage, like any other club that is successful you have to put in the work at ground level. You have to have the work done with your underage to keep the supply chain going. Huge work went on at underage, it is paying off now.

“We won a county U21 in 2017, we won a minor county in 2017. Sometimes there probably is a bit too much expected of an 18 or 19 year old. Just because he is a good minor he is expected to go in to do his stuff at adult level whether intermediate or senior.

“Sometimes we expect too much out of young fellas. It is after taking a few of them there three or four years to mature, to get to that level. Now they are really driving on. Hopefully we can keep it going now.”

In sport fortune frequently favours the brave. So Inniscarra’s passion and perseverance was rewarded eventually. Linehan acknowledges the fine margins between winning and losing – the feeling of accomplishment that will sustain them throughout the winter.

“It’s fantastic, it’s probably the result of a lot of years work,” he states. “There has been lots of fellas involved, different managers. This year we had four new faces come in from outside, they set their stall out at the start of the year. They asked the lads to buy into it, maybe it took them a while to buy into it, but when they did they all worked hard.

“Sometimes you don’t always get what you deserve, but I think these guys got what they deserved because they worked extremely hard. We rode our luck a little bit in a few games during the year. The semi-final was probably gone from us, we got a lucky break off the post. A ball came back off the post, Colm Casey again was on the end of it, he buried it, and we beat Ballinahassig.”

Then came the epics against Castlemartyr. “Time was up they got a free about 50 yards out, but conditions on the day were horrendous to be fair, it just drifted left and wide,” he adds. “It was blown up. After that you were saying maybe our luck is turning. We rode our luck again in the replay.

“We were the better team in the first half, we should have been more up, but weren’t. They came back, they took over to be fair to them for 15 minutes. We were two points down three or four minutes into injury time.

“We got a 65 and it was worked across, Colm Casey ended up getting a pull on it, and it ended up in the net. There wasn’t even time for a puck out. If you were to write a story about winning a county final with a fairytale ending that would probably be it.”

“A few parishioners said to me, it took us 19 years to get back into a final, then we had two finals in the one week,” Linehan laughs. “It created a huge buzz around the parish.

“The GAA community is one thing, then you have the people outside looking in that sometimes don’t appreciate the work that goes on in a GAA club or a sports club.

“The amount of support we had for both finals and the semi-final too, we saw people at matches that you’d never expect to be there. It took on a life of its own really. Bunting and flags started going up around the place, advertisements and signs wishing the team well.

“All of a sudden it took a foothold in the whole place, I think the place is still buzzing to be honest. That is the end of one chapter – the county final – it is one championship over and now we are looking forward to the Munster Championship.

“If it is good enough to win we will be delighted. If you perform and you aren’t good enough then you cannot have any complaints.”

To play a competitive fixture outside of Cork brings a challenge that Inniscarra will embrace. “Unbelievable, it is all a new experience,” Linehan remarks. “For everyone in the club it is a new experience, for the players too. I know a few players would have played with Cork at different levels and age groups, they’d have played outside the county.

“For the vast majority of the players and club members it is a whole new concept. You only treat it as another game of hurling. The big thing for us is to be the best we can be on the day, to let that see where it takes us.

“Historically we got to county semi-finals or county quarter-finals and it was always a case of not performing, sometimes beaten by the better team, and other times not performing.

“I think not performing is the most disappointing thing, if you perform let us see where that takes us. We are not going to beat the world, but if we perform we will be very hard to beat. Hopefully that will transpire at the weekend.”

Cahalane hopes St. Finbarr’s can live up to Munster tradition
Scroll to top