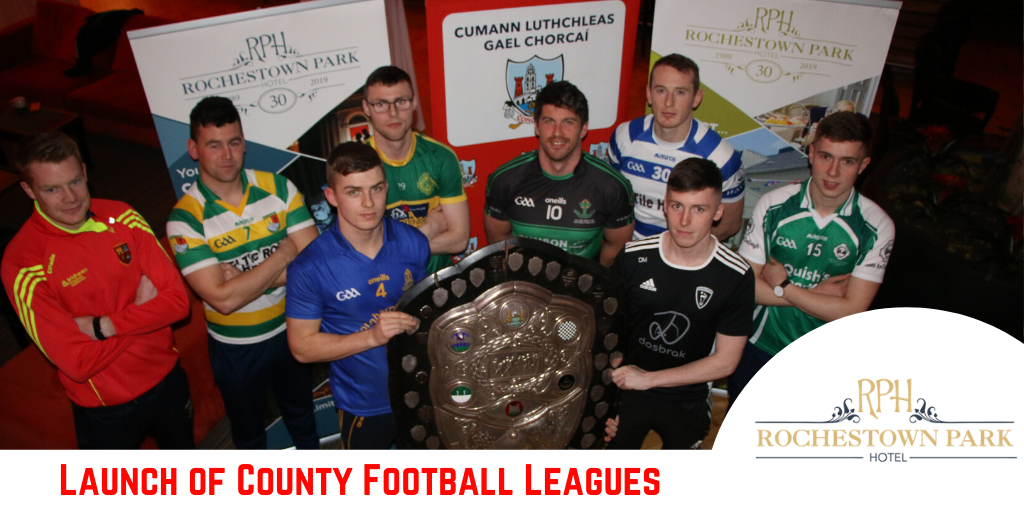 The 2020 Rochestown Park Hotel County Football leagues were launched on Monday night in the Rochestown Park Hotel. The Rochestown Park Hotel which had previously sponsored the Division 1 League, agreed to sponsor Divisions 1 – 5 in 2019 and this agreement will remain in place again for 2020. Clubs in attendance were the teams that’s will compete in Division 1 along with winners from Divisions 3 , 4 and 5 from 2019.
Cork GAA Vice – Chairperson Marc Sheehan spoke about the importance of the leagues and how the 2019 leagues were a great success with the finals being played in July. Marc wish all the teams taking part the best of luck and thanked The Rochestown Park Hotel for their continued support. Speaking on behalf of the sponsors was Sales and Marketing Manager Steve Cox. Steve said the Hotel were delighted to sponsor the leagues for the year ahead and how good it was to see the finals played in 2019 in the middle of the summer. Steve thanked everyone for their attendance and wished all the teams the best of luck for the years ahead.
The leagues begin this Friday when Nemo Rangers host Carbery Rangers at 7.45pm in Division 1.