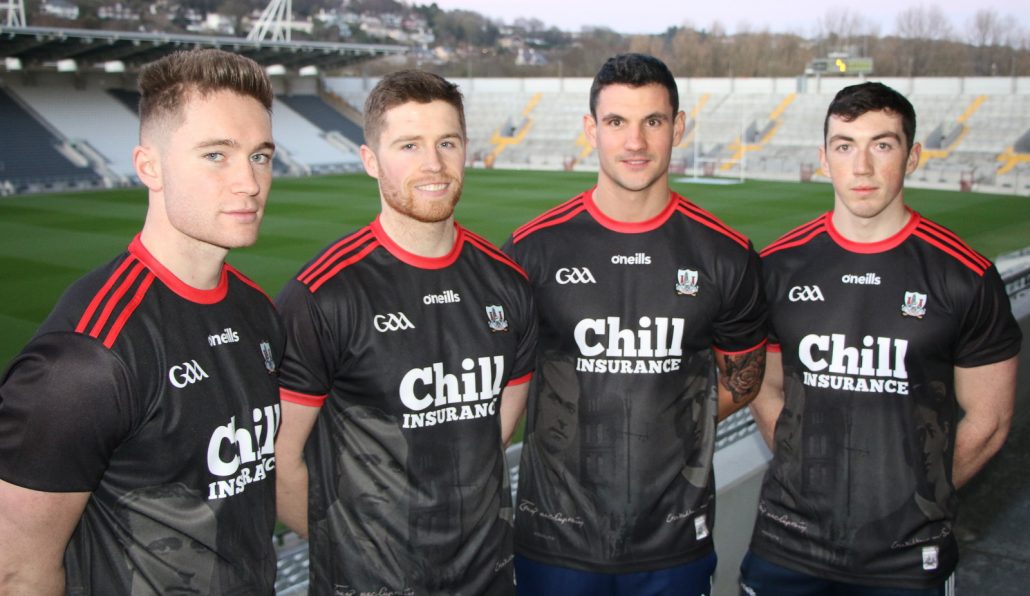 Cork hurlers and footballers will provide a notable piece of Cork GAA history as a Rebel team will take to the field wearing black jerseys for the first time. Hurlers against Limerick on Sunday and Footballers on Sunday week against Derry.Jersey will be available on O’Neill’s website on Monday and will be in local sports shops in the coming weeks.Our thanks to Denis Hurley for writing this piece.
In terms of the Irish War of Independence, 1920 was a stand-out year where Cork was concerned and the special commemorative shirts worn by the hurling team today – and by the Cork football side against Derry next week – mark the centenary of a tumultuous 12 months. 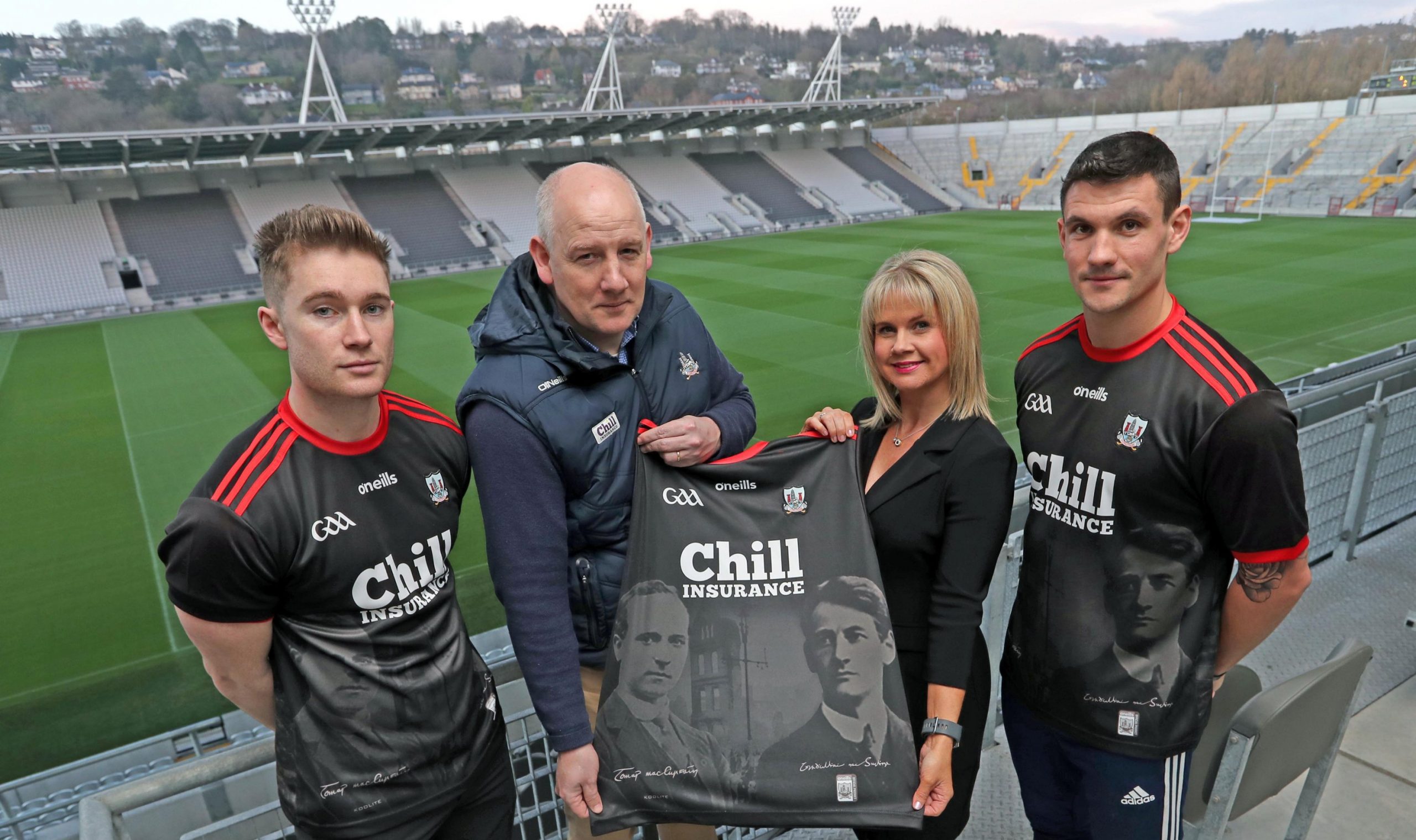 The jerseys primarily feature images of two men who died in 1920 while holding the title of Lord Mayor of Cork, Tomás Mac Curtain and Terence McSwiney, and the Kilmichael Ambush and burning of Cork also feature. Designed by Cork County Board in conjunction with kit manufacturer O’Neills, the jersey is black with red accents. 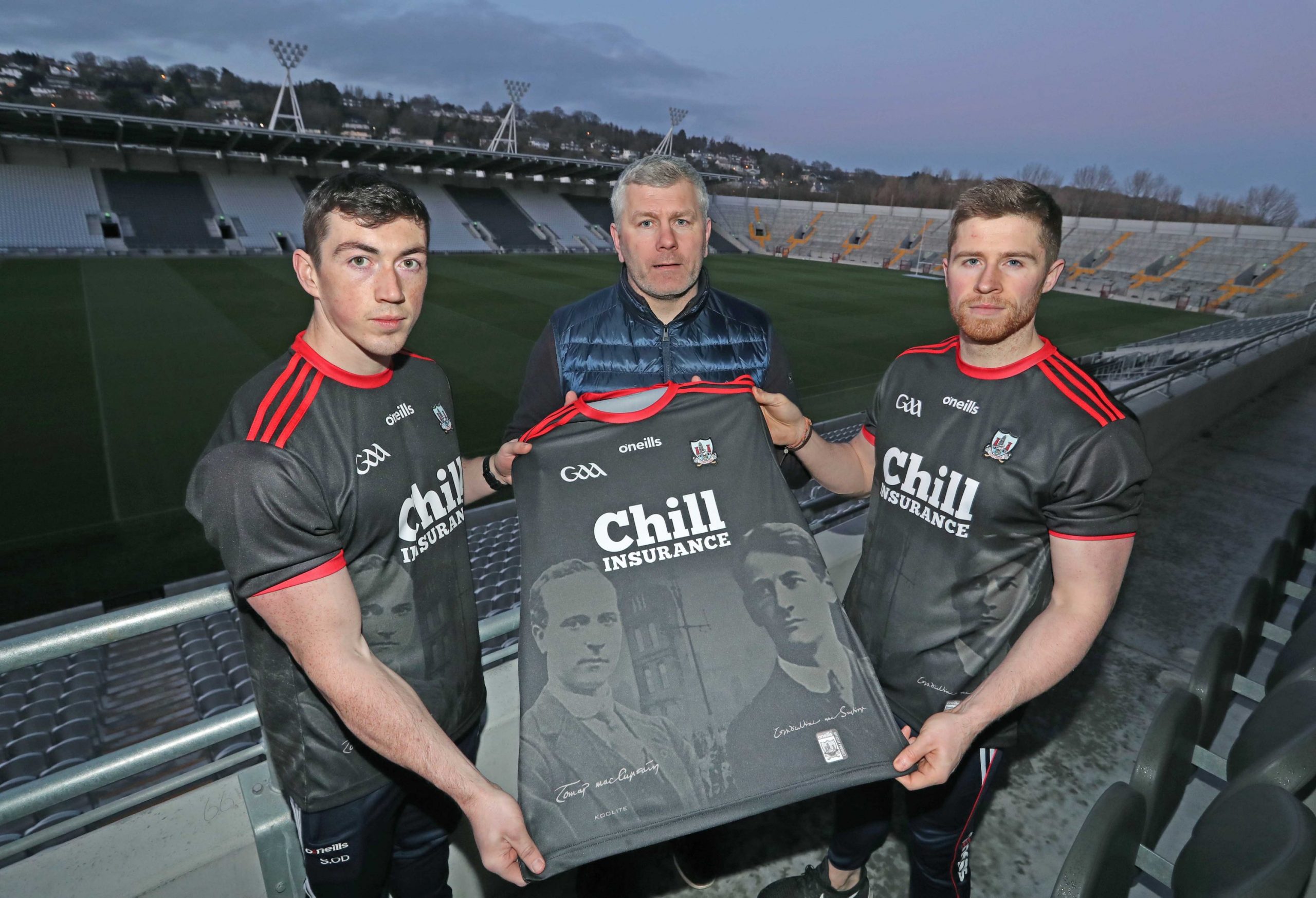 Mac Curtain, a councillor representing the original Sinn Féin, was elected Lord Mayor of Cork in January of 1920 but in March of that year he was murdered by members of the Royal Irish Constabulary.
He was succeeded in the role by MacSwiney, who was arrested in August 1920 and interred in Brixton Prison. There, he went on hunger strike and died in October. The following month, the Kilmichael Ambush took place, an event considered crucial in the war. Then, in December, an ambush of Auxiliary forces led to a brutal retribution as the burning of Cork saw damage to numerous houses, businesses, City Hall and the Carnegie Library.
Cork’s sponsors Chill Insurance have agreed to have their logo rendered in white rather than the purple and green version which adorns the usual Cork kit. The families of both Mac Curtain and MacSwiney were consulted regarding the initiative and they will be present at today’s game.
Black is the latest addition to the Cork palette. When county colours first had to be registered more than a century ago, Cork’s choice was blue and saffron – replicas of these jerseys were worn against Kilkenny in 2016.However, not long before the Munster championship clash with Waterford in May 1919, the county board offices at Cook St were raided by British forces and the jerseys were seized. A frantic search for new kit ensued and the county board luckily came across a set of red jerseys from the Father O’Leary Temperance Association team, which was recently defunct after a merger with St Finbarr’s.
Red and white became the official colours, though the blue and white of Munster became the back-up choice when colour-clashes occurred, such as the 1953 All-Ireland hurling final against Galway and the 1956 and 1957 football deciders against the Tribesmen and Louth respectively.
The 1973 All-Ireland football final against Galway saw Cork wear white jerseys for the first time and now black is added to the list of colours worn. Incidentally, it will be the third set of jerseys in as many games for the hurlers – having played in their usual strip against Tipperary three weeks ago, last Sunday’s win over Westmeath in Tullamore saw the white alternative jerseys used.
https://gaacork.ie/wp-content/uploads/2020/02/Launch-of-Cork-Black-Jersey-in-PUC-5.jpg 926 1600 Cian O'Brien https://gaacork.ie/wp-content/uploads/2019/11/logoofoot.png Cian O'Brien2020-02-20 21:35:012020-02-23 10:19:29Commemorative Jersey to be worn in Pairc Ui Chaoimh today
Cork Senior Football team to play Tipperary has been announced