Tipperary  had drawn their opening game with Limerick last week while Cork had seen off Waterford and it looked as if the Rebels would win their first two games for the first time since 2012 when subs Alan Connolly and Conor Cahalane had points to put them 2-16 to 0-20 in front.

Tipp wouldn’t relent though and gave themselves some hope as Cathal Barrett pointed – the third member of the hosts’ full-back line to do so – and when they were awarded a free behind their own 65, Forde sent over his 11th point of the night. While Cork captain Patrick Horgan had a late attempt at a winning score, his shot came back off the post, ensuring the spoils were shared.

Both teams will take a measure of positives from the game while knowing that there are still areas to be improved upon, not least periods of below-par shooting, for Cork in the first half and Tipp after the interval.

Indeed, having had the game’s opening point from Alan Cadogan inside 18 seconds, Cork could have put themselves four in front as Cadogan set up Jack O’Connor for a good goal chance but he fired wide. Tipp made the most of that let-off to move 0-3 to 0-1 in front through Forde, corner-back Barry Heffernan and John McGrath, but Cork were in front in the 12th minute as midfielder Tim O’Mahony goaled from close range after linking with Horgan.

Tipp were level by the water-break, with Cork having had six wides by then, and Forde’s frees helped Liam Sheedy’s side to go in at half-time with a 0-12 to 1-8 advantage.

They lead was extended to three early in the second half as John McGrath and Forde scored, but it was Tipp’s turn to experience inaccuracy in front of the posts and Cork were level as Darragh Fitzgibbon set up Horgan for a well-taken goal on 44. Soon after that, Horgan sent over his fifth point and Cork were back in front, 2-9 to 0-14 – they wouldn’t trail again, but neither could they fully see off Tipp.

A purple patch before and after the water-break saw Cork register points through subs Daire Connery, Tadhg Deasy and Conor Cahalane to lead by 2-12 to 0-15 with 12 minutes left but Tipp wouldn’t let them clear.

Ronan Maher with a free from distance, full-back Brian McGrath and Forde brought them within a point on 63 and, while Horgan pushed Cork ahead again, Forde and Heffernan tied matters.

Though Cork pushed ahead again, they couldn’t see out the game and Tipp secured a point. 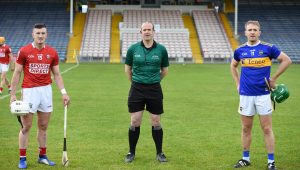 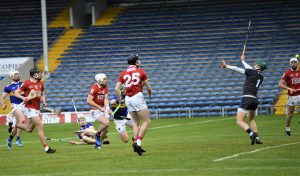