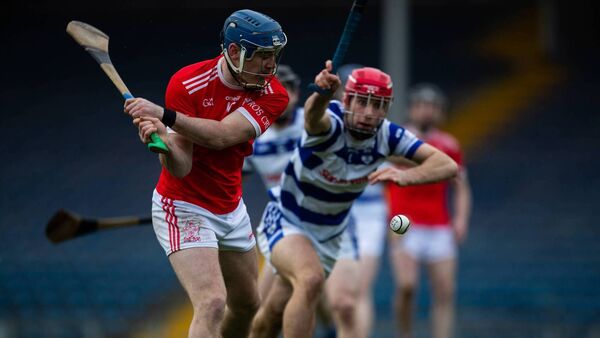 Late goals not enough for Inniscarra as Roscrea power on

Report by Stephen Barry for the Irish Examiner newspaper

A second-half Roscrea blitz once again overpowered their opponents as they blazed to victory despite two last-gasp Inniscarra goals.

Down by three when an Owen McCarthy free opened the second-half scoring, Roscrea blasted 1-6 without reply and outscored the Cork champions by 1-10 to 0-1 between the 32nd and 58th minutes.

Cashin accounted for 1-5 of that run, his 41st-minute goal making it 1-12 to 1-7, while Alan Tynan added two points as the Roscrea defence, led by James Synnott, Darren O’Connor, and Darragh Tynan, totally nullified their opponents’ threats.

Into four minutes of stoppage time, Roscrea keeper Daryl Ryan made saves from a Pádraig Holland free and McCarthy but there was still time for consolation goals for substitute Jerry Roche (64 minutes) and Seán O’Donoghue from a 66th-minute free that proved the final puck of the sliotar.

A Munster IHC final against Monaleen awaits, justifying Tipperary’s decision to regrade their second-tier senior B competition as premier intermediate in its first year.

Roscrea charged out of the starting blocks, Evan Fitzpatrick scoring after 11 seconds. They had nine shots in the first 11 minutes but only converted four with four more wides and John O’Keeffe saving from dangerous target-man Sam Conlon.

Inniscarra began to drop men to choke that space the Roscrea forwards were so enjoying, with Liam Ryan influential. The Tipp champions only had one shot in the next 10 minutes as Inniscarra struck 1-2. The goal came from their county final hero Colm Casey, pouncing on a dropped ball by the Roscrea free man, bookended by Andrew McCarthy and O’Donoghue points to make it 1-4 to 0-4.

An Alan Tynan point settled Roscrea and there were goal chances for Conlon, blocked by David Keane, and Conor Sheedy, saved by O’Keeffe, as Casey’s goal remained the difference at the break; 1-6 to 0-7.