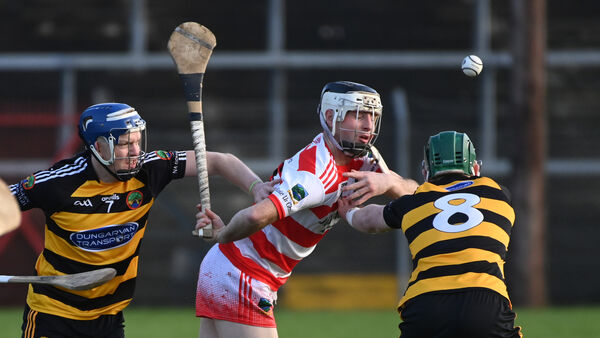 Report by Therese O’Callaghan for the Irish Examiner newspaper

Ballygiblin remain on track to defend their AIB Munster club JHC title after they finished strong in Saturday’s quarter-final at FBD Semple Stadium.

A goal from Darragh Flynn in the 50th minute eventually put daylight between these sides. The north Cork men went on to outscore Grangemockler-Ballyneale three points to one thereafter.

Mention too for a sterling defensive display which only saw two points from play scored by Grangemockler-Ballyneale over the hour.

Defending champions Ballygiblin had the breeze in the first-half, but it was Grangemockler-Ballyneale who got the scoreboard moving with their chief-scorer Darragh Shelley firing over a ’65 in the third minute.

The Tipperary representatives – although beaten in their county final by Upperchurch/Drombane — were up for the challenge as midfielder Shelley arrowed over the next two points from placed balls.

Indeed, both Sean O’Sullivan and Barry scores could have been goals after O’Sullivan’s shot took a deflection over the bar and Cathail O’Mahony had a shot off the post before Barry gathered the breaking ball for his point.

Grangemockler-Ballyneale finished the half confidently with four points on the trot from Shelley (frees), John Lyons and Conor Hahessy to lead at the interval, 0-7 to 0-5.

On the restart, Cathail O’Mahony netted in the 34th minute. To his credit, the corner-forward had much work to do, but he picked his spot to score the game’s opening goal.

A wonderful point from Joseph O’Sullivan from distance kept the Cork champions in the ascendancy – albeit by a single point – in the 40th minute.

The sides were still level when Darragh Flynn ran through for another important Ballygiblin flag – his team’s second goal in the 50th minute following good work by Dillon Sheehan, 2-7 to 0-10.