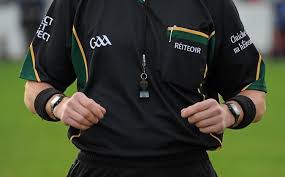 The GAA’s 72-man National Panel of Gaelic Football and hurling referees will run a cumulative total of 810 kilometres on Saturday to raise money for the suicide prevention and bereavement charity Pieta House.

They’ve already received such a strong response from the public that they’ve raised their fundraising goal from €5,000 to €10,000.

“A couple of us were chatting away about setting ourselves a little challenge and it just expanded from there,” explains Dublin-based referee Chris Mooney.

“We thought we should do something for charity and there were lots of different ideas about what we could do.

“It was actually John Keenan who then said, ‘Why don’t we match something that’s happening on what should have been the first weekend of the Championship’. From there we realised that coincided with the darkness into light run that was cancelled, so it just made perfect sense.

“Pieta House is a brilliant charity that, unfortunately, too many families in Ireland have to contact, so it’s a great cause to support.”

The 810KM distance isn’t just a figure plucked from the sky. It’s the distance of a run around Ireland from one iconic GAA stadium to another, and is also the cumulative distance the 72 referees would likely run were they all officiating matches this weekend.

“What we did was we tried to base the maths on doing a bit of a map of Ireland but also similar to the distances that we cover in a match,” explains Mooney.

“Our GPS stats from last year that Aidan Brady would have compiled through DCU would say that in a senior championship match you run around 11.2 kilometres per game.

“So if we took the 72 referees that 11.2 would equate to 810 kilometres. So that’s the distance of travelling from Wexford Park to Páirc Uí Chaoimh to MacCumhaill Park in Ballybofey and then back down to Croke Park.

“It’s a bit of a lap of the county grounds of Ireland and we’re averaging out our match distance while we’re at it.”

Firstly, that as a collective they have a natural camaraderie much like a football or hurling team does, but also that there’s no shortage of good-natured rivalry when it comes to the fitness testing.

Saturday’s charity run is proving to be no different with screen-shots of training times whizzing around the group to up the ante ahead of the weekend.

“Yeah, of course,” says Mooney. “When I first floated the idea the first 20 or 30 texts back were all thumbs up but it didn’t take long for someone, I think it was Colm Lyons in Cork, to mention a football-hurling rivalry.

“Fergal Kelly is the football marathon runner and Sean Cleere is the hurling marathon runner, so if you were to put money anywhere it would be on one of those two. Look, it’ll be friendly competition.”

Much like the inter-county players, the national panel of referees are doing all they can to maintain their fitness during the current enforced break from collective training.

DCU’s Aidan Brady oversees the fitness training of the referees and has given them programmes to work on during the lockdown.

“Aidan sends out stuff to us all the time,” says Mooney. “As he and Donal Smyth (The GAA’s National Match Officials Manager) have been telling us, the big thing at the minute is that it’s maintenance over elite improvement.

“Certainly with the 11k coming up and the weather getting that bit warmer, Aidan has sent us out some stuff for training sessions this week to keep the body loose and nutrition advice as well to fuel up for the run.

“Aidan keeps in contact with us as does Donal Smyth about different things we can be doing.”

Absence marks the heart grow fonder. Just like every footballer and hurler in the country, the referees are just as keen to get back onto a pitch as soon as the health authorities deem it safe to do so.

“100 per cent,” says Mooney. “Look, we’re all more than willing to abide by our guidelines and I think the GAA have been brilliant in that regard in terms of observing the measures that the Government are putting in place and stuff.

“Absolutely, we’re looking forward to getting back to the pitch when it’s safe to do so.”

You can donate to the GAA’s National Panel of Referees Pieta House fundraiser HERE. 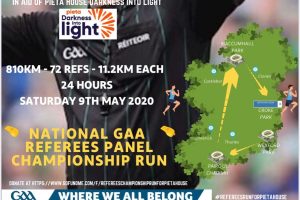 Covid-19 GAA Update for Clubs and Counties
Scroll to top